Chris, G4HYG, has just released a new Windows program called APRS Messenger which supports APRS messaging using the PSK63 mode. Various experiments made in the past suggest that this could give better reliability at low power levels than 300 baud packet which is normally used on HF. APRS Messenger also functions as an Internet gateway so any error-free packets received over HF are sent to the APRS-IS network. 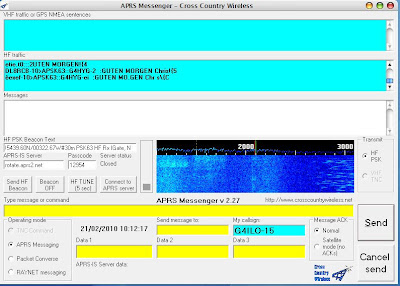 An unfortunate limitation of the program at the moment is that it will only talk to the “default sound card” which on most Windows computers is the one used to play system noises, listen to Internet audio and video and so on. So I am unable to use it with my K3 at the moment. For test purposes I have connected my HB-1A QRP transceiver to my 30m antenna and fed the headphone output into the mic socket on the front of my PC.

I have decoded a few packets already, though many seem to contain some corruption. I am wondering why the little-used QPSK63 mode was not used for this application? As I understand it (and I could be wrong) QPSK63 takes up the same amount of bandwidth but incorporates some forward error correction that improves the likelihood of good copy compared with plain PSK63.

Chris has apparently agreed to talk with Lynn, KD4ERJ, about the possibility of making APRS Messenger work with APRSIS32. The possibility of using Lynn’s full-featured APRS client to send and receive APRS over HF using PSK is quite exciting.

By the way, if you are wondering why the screenshot shows a Mac program the reason is that I’m using an OS X theme under Windows XP!