APRS On Your Phone

27 September 2013 | by Mike AD5A  |  Share |  Tweet |  Leave a Comment (5)
A lot has changed during my ham radio career since I was first licensed in 1989. The logging was manual, you received your DX news via a weekly newsletter that you actually received in the mail and packet was all the rage. Thanks to innovation of the ham radio community, now several technical generations later, we enjoy a very different hobby than we did in those days.

Periodically, I peruse the app store on my iPhone to see what new cool ham radio apps have been developed. I will admit it has been a while since I've done that so this is probably old news to many of you. As I scrolled through the apps I came across an APRS application for the iPhone. APRS (Automatic Packet Reporting System), developed by Bob Bruninga WB4APR, combines packet radio technology with GPS technology to allow you to transmit your coordinates to a digi-peater that then posts your position on the internet. This allows others to know your location for any number of reasons, i.e., to follow progress up a mountain or simply for others to know that you are safe and to follow your progress to your destination. However, previously, to enjoy this functionality required a special radio with the GPS built in or a modification to add GPS functionality to your radio. However, with the apps now available you can accomplish the same thing with your iPhone. Of course you have to have cell service for the system to work and it can use up battery power, but the functionality can now be used without a radio.

So if you are a SOTA activator and have avoided the expense of getting a VHF APRS set-up, you can now accomplish the same thing with your phone. You can avoid battery degradation by only turning your phone on at intervals and allow the system to register your position, then turning it off again. 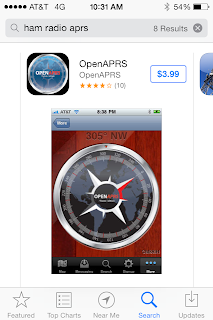 One of the APRS Apps for the iPhone
(I have no commercial interest in this product, nor have I actually used it)﻿
Mike Crownover, AD5A, is a regular contributor to AmateurRadio.com and writes from Texas, USA. Contact him at [email protected].

5 Responses to “APRS On Your Phone”