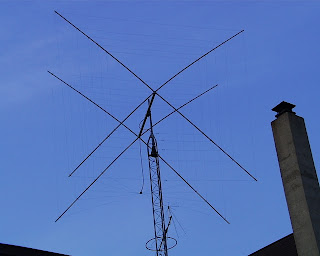 Almost ten years ago I installed my first tower at my radio artisan lair.  I was really worried at the time that I would get verbal static from the neighbors.  So at first I installed a 30 foot Rohn 25 tower against the house with a hinge base.  I placed an FM broadcast antenna at the top in order to have some aluminum up there to get the neighbors and everyone passing by used to the visual anomaly.   No one said a word.

About six months later I had an antenna party and installed another ten foot of tower and a Lightning Bolt two element five band HF quad along with a Yaesu SDX-1000 rotator.  The thing was a monster, a three-dimensional monstrosity measuring about 16' x 16' x 8' with a four inch diameter boom.  Lightning Bolt, now a defunct company, must have been in a garage.  The antenna went together well, but you could tell it was very homebrew.  The element wire holders were made out of plastic brake line tubing and hose clamps.  The balun was a PVC plumbing end cap with plastic poured in it.  The boom end caps which held the fiberglass spreaders on to the boom were probably the most professional looking components as they were thick, welded aluminum.

I selected a quad at the time because I knew on this lot I wasn't going to be able to go much above 40'.  I didn't have to get a building permit, but a township official told that the fall zone had to be within the property line, so I wasn't going to push the height issue.  According my antenna modeling and articles I had read, the quad had a lower angle of radiation than a yagi at the same height.  Today I know the difference is negligible but a quad requires much more maintenance than a yagi and it takes up too much vertical real estate, especially on a short tower like my 40 footer.

But the antenna was magical.  Folks could have sworn my QRP signals, both phone and CW, were hundreds of watts.  In contests I could really stack the multipliers on 20 meters.  I got QRP DXCC in about two months after ARRL started the award.  My best catch was Bhutan, netting a contact with the first call on CW running a barefoot 100 watts.

The first two weeks I had the antenna I would drive home from work and see the top of the quad peeking up out of the trees from a mile away.  It made me somewhat sick seeing how big the antenna  was behind my house, despite understanding its technical beauty as a radio artisan.  People drove by and would rubber-neck looking at the huge antenna.  I know some folks called the thing a big fly swatter.  Eventually I got used to the appearance of it.

The neighbors on either side didn't seem to mind the antenna much.  I was concerned about the ones behind us.  It was their vacation home and they were usually there every other weekend.  The antenna was almost right in the middle of their view of the lake.  I would visit them maybe three or four times in the summer, bringing fresh vegetables from the garden.  They were friendly couple, but I thought the antenna might change that.

The first weekend they were at their vacation home after the quad went up, I made a visit with some fresh tomatoes from the garden.  We engaged in the normal conversational stuff: home projects, local news, and the weather.  The man, in his mid 60s, brought up the topic of the antenna.  Oh no, I thought, he's going to give me an earful about the quad.

"Does your new antenna do 40 meters?" he asked.

"Oh, I got a novice license back when I was a teenager.  I did it for a little while, but got into music and other things and let my license expire.  Do people still do ham radio these days?"  he inquired.

Needless to say I never had a problem with the neighbors :-)

2 Responses to “Antennas, Tomatoes, and Neighbors”