Antenna is on order 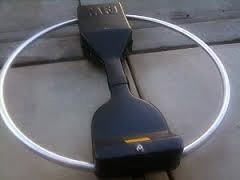 The MFJ 1788 is now on order.........well back order for now and was told it could be up to 4-6 weeks before the supplier see's it. I did go online and see if any U.S radio outlets have the antenna. They do but the shipping is close to 200.00 then you add taxes and custom fees it puts the price out of reach. I chose this antenna over the MFJ 1786 as it has 40m  but not 10m. Seeing the solar cycle is on it's way down 10m is not going to be a go to band for me. Having 40m seemed the way to go and thus the MFJ 1788 was chosen. To go along with the antenna Comet has a great way to bring your coax indoors without leaving a door open to the cold. The CTC-50M is a ribbon type coax cable that is supposed to allow you to run it threw a door or window.....now having said that I have read online that some have damaged the cable by slamming a
window or sliding glass door on it. I don't plan on putting it to the test in that fashion any time soon. Also I ordered the MFJ 1918 tri pod stand for the antenna. I'm not going to play around with cheap tri pods or ones that are just meant for cameras, don't want to come home to the antenna on it's side and possibly damaged. From what I have read about the MFJ 1918 online it seems to do a great job in supporting the antenna. The last thing I have to pick up from the local hardware store is a BBQ cover for the antenna to make it look like.........yes you guessed it....a BBQ! At this point in time it looks like the ham radio bug is going to have to be satisfied with the KX3 and portable operations. It's a bit cold out these days for op's from the car (-30 with wind chill today) so for the time being I will be putting the Alexloop on the balcony and see how the fishing is.
Mike Weir, VE9KK, is a regular contributor to AmateurRadio.com and writes from New Brunswick, Canada. Contact him at [email protected].

13 Responses to “Antenna is on order”