Another new Canadian station has been activated on 630m ... VE3OT, Mitch, in London, Ontario.

The move to 630m uses the same transmitter with a retuned loop and new output LPF. Although the antenna tuner still needs a capacitor swap and a new toroid to perfectly resonate the loop, Mitch has been getting many good 'audible' reports from eastern stations as well as from the central states and as far south as Texas. 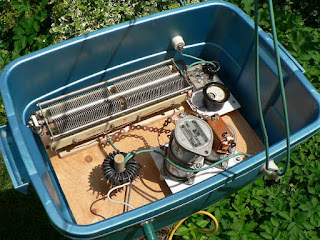 Present testing is in the QRSS6 CW mode on 475.0 kHz. Unfortunately, since moving up to 630m, E-W propagation has been hit and miss and although I can copy his QRSS6 CW signal, I have not had aural copy as of yet ... maybe tonight.

Hopefully when the geomagnetic field calms down again, Mitch can work some of the VE7's out this way on CW ... wouldn't that be a nice way to start the New Year!