Propagation numbers baffle me sometimes. Yesterday, when the numbers looked so good, I thought I was going to end up getting skunked. I did end up working Oleg UR3IFD, in the Ukraine, and I also had a very brief, QSB busted QSO with Paul WA9PWP. But other than those two very brief contacts, it was pretty grim. There wasn’t else much to be heard and my CQs on several bands went unanswered. Advance the clock 24 hours, to find the SSN is down to 35 and the SFI is only at 110. Not great numbers. But despite the numbers, I had a great outing.

I started out on 17 Meters with a brief QSO with Ted LZ1ND, who was calling CQ. Ted was a good 599+ here in New Jersey, and I got a 549 in return. Not a bad report, and Ted got all my basic information, so I was definitely copy-able in Bulgaria. And it looks like Ted is quite comfortable behind the dial of a QRP rig himself. Here’s an old photo I dug up of him on the Web, taken while he was participating in Bulgaria’s HF QRP Field Day. 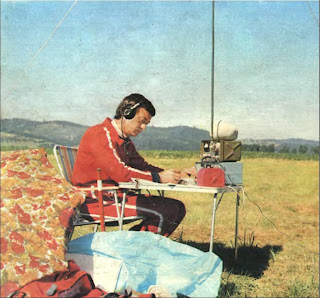 After Ted, I switched on over to 20 Meters and called CQ. I was answered by Ron W5VYN, from Whitesboro, TX. Ron had a magnificent signal into New Jersey. The fact that he was using home brewed gear made it all the sweeter. Ron had asked me if he was generating any key clicks, and I was happy to be able to tell him that he had a perfect, solid and stable 9 in the “T” portion of RST. His home brew rig sounded just as good as any commercial rig out there. That was a nice QSO.

That was followed up by a “quickie” QSO with Greg N4KGL. Greg, who’s down in Florida, was using one of those new PAR ENDFEDZ Trail Friendly antennas, which was generating a nice 579 signal for him. It’s always nice chatting with Greg, and I wish I could have stayed on longer. But as always, time flies when you’re having fun, and it was time to break down and head on back to work.

So it just goes to show …. you can have a great QRP day, even when the solar conditions say, “Maybe not”.

Even so, I had to laugh on the way home from work.  As I was driving, I was listening to two Hams on a local 2 Meter repeater bemoan the current sunspot cycle.  One was complaining about “How you just can’t work any decent DX without at least a 500 Watt amplifier!”.  I almost lost it right there, I started chuckling so hard.

Lots of QRPers, including N8ZYA, K3WWP, W2LJ and many, many others have log books that attest to the direct opposite!