The NJQRP Club is announcing a new summertime operating event – “The Skeeter Hunt”.  The objective is to get QRPers out of their shacks for the day; and into the fresh air and sunshine, to spread their wings and fill the airwaves with “Skeeters”.  While commercial equipment can certainly utilized, bonus points will be awarded for those who personally home brewed their own or kit built their own equipment (equipment not built by the operator would not count as either home brewed or kit built – it would be considered commercial equipment).  The inaugural event is to be held on Sunday August 12th.  It will be a four hour sprint – from 17:00 UTC to 21:00 UTC (1:00 TO 5:00 PM EDT). 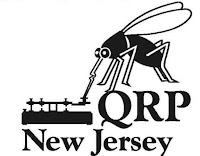 Stations who wish to be designated as “Skeeters” can get a Skeeter number by requesting one by sending an e-mail to [email protected]  Skeeter numbers would be issued from May through the day before the event.

Bonus points – design and home brew a key or paddle specifically for the event and earn an extra 1000 points.

These are suggested starting points, of course. Feel free to spread out and give your “Skeeter” wings a chance to do their thing.

Logs, photos and soapbox comments can be sent to [email protected] no later than 30 days after the event.  Certificates will be issued to the top scorers of each category as well as others to be determined.

A table of call signs and issued “Skeeter” numbers will appear on a separate page on this site.

Hope to hear and work all of you during this new event. Special thanks to the NJQRP club for their sponsorship!