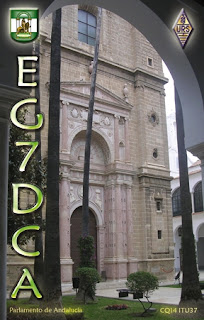 I switched on the radio this afternoon, started up KComm, and the first station that printed up on the screen was EG7DCA, a special call to mark Andalucia Day. A rapid exchange of signal reports and he was in the logbook.

Andalucia Day, as this link will tell you, is the anniversary of a referendum held in 1980 in which people voted for the southern province of Spain, Andalucia, to become an autonomous region. This year that anniversary falls on 26 February, today.

I love Andalucia. The name immediately conjures up for me a vista of whitewashed villages nestling among rugged mountains, memories of walks on mountain paths and lazy days enjoying a glass or three of local wine in a tapas bar.

I often used to dream of living in an Andalucian village. I could happily have become one of the many British expats out there. But dreams don’t always turn out how you imagine. The endless sunshine seems irresistible but summers can be unbearably hot and as one gets older you start to need things like healthcare, which is good, free and English-speaking in Britain. In view of what has happened to me in the last two years it’s probably a good thing I didn’t become an expat!

Still, I can’t look at a picture like this without feeling nostalgic!

One Response to “Andalucia Day”