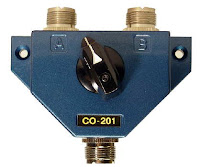 Over the past few years, the Reverse Beacon Network (RBN) has been utilized by thousands of amateurs to gauge the performance of their antenna systems, to check propagation or to compare their station's antenna performance against another nearby amateur's system.

For those not familiar with the RBN, it is the opposite of a network of 'on-air beacons' and consists of a network of 'on-air receivers', usually SDRs, that automatically skim a wide range of frequencies within the CW bands and report back what they hear, along with a definitive signal strength report ... all posted immediately back to a central website where you can read the data from the various stations that have heard your signal. Calling 'CQ' or sending a few 'TEST de' signals, followed by your call sign, will trigger the desired network response. 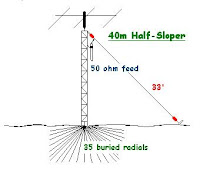 I have recently been testing a new 40m antenna, an inverted-V dipole at 80', against my long-used half-sloper, but have been using a different online receiver network to make my real-time comparisons ... the KiwiSDR receivers, mentioned in previous blogs. I'll have more to report about the new antenna and its performance in an upcoming blog, once everything is finished and the antenna is fully optimized.


When it comes to real-time 'A-B' antenna comparisons, I found the KiwiSDR network much more interesting and informative than using the RBN. If hard data is what you want, then the RBN will provide it, but not in the same real-time, 'A-B' style that the Kiwis can offer. Once set up so that the two antennas may be fast switched, 'A-B' style, you can actually hear the difference immediately, with your own ears, as if sitting at the online receiver hundreds or even thousands of miles away. By sending a continuous series of dashes while switching between antennas, the comparison can be strikingly obvious, as the propagation variances experienced in an RBN comparison are no longer a factor. One might argue that using longer RBN comparisons, averaging the signal strength over a period of minutes, may yield a truer picture of antenna performance ... but this method lets you hear the second-by-second differences as they happen.

My antenna testing is not yet complete, as much of the initial time was spent trying to determine which online receivers were suitably quiet enough to utilize. Many of them were rejected for being far too noisy to be useful while many others were found to be ideally quiet. I am slowly working my way through the list!

So far, I have been able to listen to my transmitted signal and compare the two 40m antennas on numerous receivers from coast to coast, both near and far, as well as into the Caribbean and South America. I have found the best power to use is between 1 and 5 watts, as making the signal intentionally weak at the receiver end makes subtle differences of just a few db easier to detect.

The gathering comparisons are fascinating as often the signal strengths between my two antennas are very different. Often the sloper and the inverted-V are neck and neck, while in different directions or at different distances, one or the other is a clear winner. On many far-off receivers, I was easily able to detect my signal with all power controls set to '0' with no indication of any output showing on my meters, a rather surprising observation and another reminder of how RF just loves to radiate ... even at very low levels!

If you want to try this yourself and can quickly switch antennas 'A-B' style, here are the direct links to a few of the receivers that I have found to work very well so far ... with low noise levels and no man-made crud, while listening on 40m.

I will continue to update this list as more receivers are tested ... now back to some outdoor antenna tweeking!

3 Responses to “An Online Alternative For Comparing Antenna Performance”