An Elk in the garden: satellite contacts with the FT817 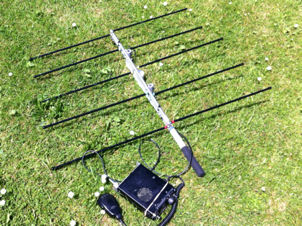 Pete uses the Arrow 145/440MHz antenna and as far as I could see, it was not readily available in the UK. I contemplated ordering one from the USA but the thought of the import duty put me off a bit. AMSAT UK carry stocks of the ELK 145/440MHz log periodic which also have a good reputation albeit at a price. I’d recently disposed of a couple of bits of kit on eBay, so I felt I was in credit and ordered an ELK!

I was delighted when it arrived this morning. I wasted no time in making up a cable between the N connector on the ELK and the FT817. Assembling the antenna proved quite straightforward.

My first check with the antenna at ground level in the back garden was to see if I could hear GB3VHF, which I could, so given that’s not a huge signal, I was confident the antenna was working.

I looked at GoSatWatch on my iPhone to get some satellite predictions and as luck would have it, SO-50 was passing over at precisely that instant. I heard signals, so that was promising.

The next pass of SO-50 was a nice high one, so I was all prepared and sat out on the lawn with the FT817 and the antenna. R1AO was the first station heard, and although he had a little difficulty getting my callsign, we just about made it. IZ1DBY heard me and called as well, so that was very promising indeed.

I’m hoping to try some SSB operation through FO-29 as well.

The ELK antenna comes with a neat carrying case that will easily fit in a rucksack. It will form a very useful part of my backpack portable station I think. I’m also looking forward to doing some satellite work when we’re on holiday in Devon from a slightly rarer square than IO91!

2 Responses to “An Elk in the garden: satellite contacts with the FT817”