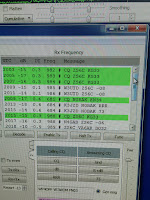 The morning today was full of chores that had to be done so it was up early and go go go. That plan worked out just fine and it allow me to have some time at the radio. I listened for a bit on the CW portion of 20m and it was very slow. I then decided to stay on 20m but move onto JT-65HF and see what was happening there. Right off the bat I decoded ZS6C from South Africa I was not able to connect up with him after several tries he seem to fade off the waterfall. That sure would had been a nice contact but on the positive side I have seen him on the waterfall many times in the past so there will be more opportunities.  I did have lots of  U.S stations calling CQ as well but I was not able to make contact with any of them either day......just not my day on the waterfall. I then changed it up and moved to calling CQ...oh and this post was being written while I was operating JT-65HF you just have to keep an eye on the waterfall and the decoded message. It is going to take a while for me to get the hang of the timing down. When you call someone on the waterfall there is not much time during decode to see if they are coming back to you, coming back to someone else or calling CQ. I did have KA4HOT come back to me but we were not able to complete the QSO most likely because I'm still getting the hang of the QSO rhythm.
Mike Weir, VE9KK, is a regular contributor to AmateurRadio.com and writes from New Brunswick, Canada. Contact him at [email protected].