Amazing weekend on the radio!

This past weekend was the running of the ARRL International DX CW contest. If you are not a CW buff then there is also an ARRL International DX SSB contest March 5-6. These contests are great to log some very nice DX stations. I had a few interesting one-offs in this contest but more on that later. If you are a frequent reader of my blog you will know I have graduated from search and pounce contesting to holding my own and calling CQ contest or running as it's called.

In this contest, DX stations are only allowed (to gain points) to contact stations in North America and likewise, North American stations can only contact DX stations. With this in mind, I knew that it would be interesting for me to be on the calling (running) CQ contest end of things. The contest is 48 hours in length and as always I have high hopes of getting into the action at the start, Friday at 8 pm. Well as always it's Friday and I just want to relax and take it easy. So as always I started Saturday morning and I was not disappointed the bands were very very busy with DX.

Before beginning the contest I opened up my go-to CW practice program G4FON contest trainer. I find it to be very helpful to get my ears warmed to fast speed CW before going live! I spent about 15 minutes with G4FON and then it was off to the races. I started out sending CQ CONTEST at 31 WPM but found most stations coming back to me came back at around 24-30 WPM. I then slowed things down a bit as I don't want to be sent at speeds where no one wants to answer me.

Saturday morning and afternoon went well and here is one of those "one-offs" I was mentioning earlier. On Saturday EA3OH spotted me on a cluster....all of a sudden all hell broke loose!! I called CQ CONTEST DE VE9KK and 10-15 stations (most all at once) were calling me. I had NEVER had this happen and I can understand what rare DX stations go through. If this was not a contest I would have worked split but as they say, it's not a perfect world. Once the first 3 seconds of what I called a CW mess finished then one of two stations would toss out their call. This would allow me to work with them and I continued to work this way. Sometimes a few stations waited and I could only get 2 or 3 letters of their call. I would send out those letters followed by ?. This worked very well but I assumed some stations just moved on and came back later.

I was spotted about 4 different times and to be honest I felt overwhelmed and I started at times to make silly mistakes. Hitting incorrect keys so wrong call letters were sent, not hitting a correct key on my contest program so instead of my exchange being sent I sent TU (thank you). I could just imagine the look on the face of the station I was contacting. At one point I called Julie my wife into the room and with headphones removed I gave her a listen of the "pack.

When I was spotted my hourly worked station count went to around 80-90 per hour. To be honest, those times were exhausting and at times my nerves got the best of me. I now fully understand one of the "how to's" to trying to work a popular station. Don't drop your call as soon as the station signs their call. He will only hear what I did....a CW mess. Wait until things clear, about 3 or so seconds and then drop your call in. This was how I heard stations calls or part of the calls.

Here in New Brunswick, our COVID restrictions had just been lifted to the least restrictive level. This meant going to a restaurant was almost back to normal. Julie wanted to celebrate by us going out for dinner. That gave me a nice break from the contest BUT it's time for another "one-off". Once we arrived home from our dinner out almost right away I started to feel ill. YUP bad food from the restaurant, I was sick all Saturday night and Sunday until late afternoon. This cut into my contest time and evening in the afternoon while on the radio I was not feeling the greatest.

Since we are on the subject of "one-offs" here we go again. I was on 40m (7.027) early Sunday evening and a station came back to me but it was not your standard exchange. I heard "PSE QSY UR ON CHAN 816 PSE QSY TU" I thought WHAT....so I sent "? ?" and the same message was sent. No worries I sent "SRI" and two short DIT's. After the contest, I did some online searches and came up with nothing. Does anyone know what this op was talking about I would be interested to know?

Because this was a contest with emphasis on DX I was pleased to have made some nice DX contacts such as:

There is a nice piece of software that takes your ADIF file and shows you many visual options adventure radio.

Below is just one option the program gives you to view your ADIF file. All the contacts I made in the contest. 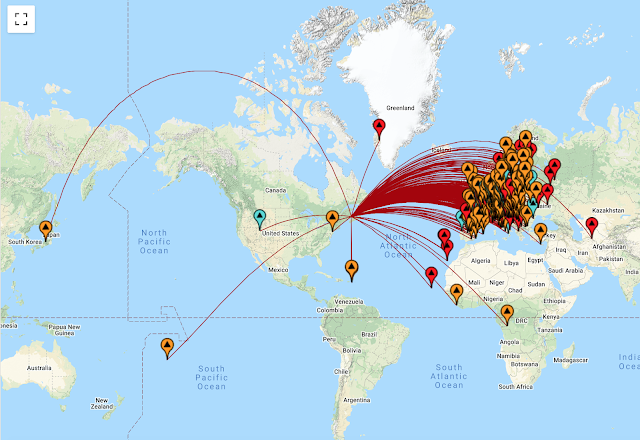