All I wanted was some radio time! 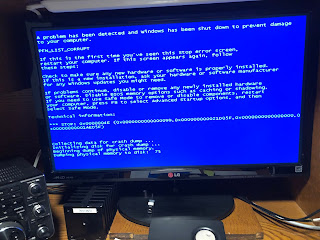 Good afternoon everyone it's almost been a month since my last post. Now fall is upon us the evenings are a bit cooler and the leaves are starting to turn colour. The evenings are dark a lot sooner and for some reason, it just feels later than it is when this change happens. Once again my radio time has been sidelined with getting jobs done outside some major jobs and others just stuff that has to be done before the first snow. In the evening I have been spending my time reading the many blogs I follow and keeping up on ham events. As for radio time, it has been off and on but more off then on as by the time evening comes I just want to read some blogs and relax with my feet up. When we get a few days of rain it brings the outdoor project to a halt and I am able then to have some radio time.

During my last rainy spell, I was able to flip the radio switch and get on the air BUT my PC had other plans for me. My Windows 7 pro was starting up and I was greeted with the windows blue screen. This is not the first time for me regarding this problem but unlike the other times, I was prepared for this event. I installed a backup program (Macrium reflect free edition) on my PC so I was able to clone and image my hard drive to a USB hard drive. When issues happen I would be ready and with the clone of my hard drive Macrium Reflect would guide me on how to boot from this clone and all would be good to go.

With a smile on my face, I plugged in my USB drive and told my bios to boot from the USB. My smile turned to a frown when nothing happened! Maybe I was not following the Macrium Reflects step by step correctly. As I read past the step-by-step instructions I found the issue and it read "do not attempt to boot your backup from a USB connected hard drive as windows will not recognize the OS from this type of drive!!!!!

My next idea was to head to Windows restore and restore the system to a time I had saved when things were working just fine. I proceeded to Windows restore to find all my restore points were gone! Later it occurred while running an OS performance tool I was asked if I wanted to delete files that have not been used for a while and I said yes......well one set of those files was my restore points!!!

All was not lost as I felt I could move the clone information from the USB drive to an internal spare drive in my PC. I still have access to my Windows 7 OS  it's funky but is working enough for me to open the Macrium Reflect program and transfer the clone from my USB drive to the internal separate drive in the PC and then I can instruct the PC to boot from that internal drive.

Easy peasy right.....WRONG....silly me I was only paying half attention to the transfer of info and I am not sure what I did but the end result was my main hard drive was wiped clean and the PC was not able to reboot as there was no OS to be found anywhere. Next time when the program asks me "are you sure" then "are you sure you are sure" don't click anything stop and think what I did!

All is not lost my plan now was to reformat the drive and do a clean install of Windows 7 pro and then start the transfer idea again and this time pay attention!! I want to keep with the transfer idea as that would give me all my installed programs and settings and not starting from scratch. Fast-forward.... Windows 7 installed and with many minor issues as always with Windows. I then attempted to download Macrium Reflect to begin.....FINALLY....the transfer but using Explorer it refused the download the program. After trying some workarounds I just downloaded Firefox and it was more than happy to download Macrium. It was nice to be making some progress oh and let me say that up to this point I have been playing around at this for almost 2 days now.

Paying very close attention this time I ran Macrium Reflect and was successful in transferring my USB files to the separate E drive. It was time to now instruct my bios to boot from drive E and see what happens. Something did happen but not what I expected to happen. I was asked to choose an OS it seems I somehow went from no OS to now having 2. When I chose the first option the PC restarted and I was brought back to this same screen. I choose option 2 called recovered and low and behold Window 7 was back with all my programs, settings and windows updates intact.

The last thing I did was deleted the first option OS and when I did this the OS option screen was gone and things just started in Windows 7 as it should. Lesson learned and I am now doing all my backups from an internal hard drive. Overall this long ordeal was a good learning experience and I confident that next time I will have a smoother transition if my OS goes for a crash.

6 Responses to “All I wanted was some radio time!”