AlexLoop gets an airing

Several of my readers have been patiently waiting to know how the AlexLoop and KX3 have been performing together. I am interested too, but I’m not yet well enough to attempt any outings with a rucksack full of radio gear. Today it was raining and I wouldn’t have wanted to go out anyway. So I decided to operate portable from inside the warm, dry shack instead. 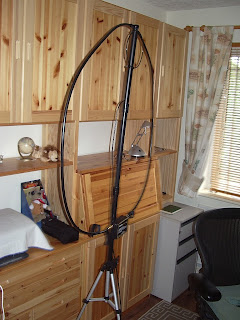 The AlexLoop was assembled, mounted on its tripod and stood in a corner of the shack. The position is far from ideal: my shack is really small and the antenna was too close to the shelves containing books, magazines and equipment. I could only get an SWR of around 5 to 1 on the higher bands. I used the KX3’s built-in AMU to take care of it. That’s not how a magnetic loop is supposed to be used, but in this situation there’s no alternative.

The KX3 was run off the shack power supply so the power out was the full 10 watts. I hope to find a battery that will provide enough volts that I can run 10 watts in the field, but as I don’t yet have one this was a little bit of cheating!

The first band I tried was 12 metres. Here, Valery, ER3ZZ in Moldova came back to my first call and gave me a 5 and 5 report. Easy peasy.

Next stop was 10 metres, where Yakov RA9XAU quickly replied to my call. Another 5 and 5 was logged. Can, TA3GO was next in the log. This time a 5 and 9 was received.

One EA9 didn’t want to talk to me as I wasn’t DX. That would actually have been an all-time new country for me, as I think Ceuta-Melilla is a separate entity from Spain. Victor, RV3RM was working other G stations and gave me a 5 and 8 report.

After lunch I spent some time listening to, and attempting to call, Stateside stations. Some were very strong but I couldn’t be heard over the pile of stations calling them. That would have been quite a scoop –  to cross the Atlantic with QRP and a portable antenna. I heard Yuri UT9MZ working Europe so I called him and 5 and 9 reports were exchanged.

I spent some time listening on other bands. Peter I5CTE was a massive signal – genuinely peaking more than S9+20dB on the KX3’s S meter. on 15m. Italy is a good direction for me, for some reason. We had a proper chat lasting several minutes and Peter told me that my QRP signal peaked over 5 and 9 at times.

My very subjective conclusion is that the AlexLoop feels no different in operation than my attic multiband dipole and MFJ magnetic loop. I didn’t even feel at a particular disadvantage from the low power, except perhaps when I was attempting to work USA stations. The AlexLoop is a very good antenna and together with the Elecraft KX3 make for a potent combination, especially if you can take advantage of the KX3’s full 10 watts output.