The last week or two seem to have had their share of interesting propagation, but little time to blog about it.

The morning of Sunday, 16th September was an interesting one on 432MHz. Thanks to Steve M0BPQ on Twitter, I gathered that there was some good tropo into the south of France and Spain. I went up to the shack not really expecting to hear much, but there was a French contest on and I was surprised to hear signals. The first couple of stations that I worked were in the north of France but with excellent signals. I came across F6EZS/P who was very loud and I assumed he was in Normandy. I was a bit surprised when it turned out that he was in IN93 square in the Pyrenees – we had an easy QSO. I was also pleased to work into JN03 square with F2JR/P (from memory) – another nice QSO at just under 1000 km. I wasn’t able to stick around too long as I had a busy day planned, but thoroughly enjoyed the QSOs.

Over the last week or so, 28MHz has shown some great improvements in propagation. Like last year, I have been playing on JT65A and although have not made so many QSOs, have been interested to see what has been coming through and where I have been heard, even when I’ve been working other stations close by – the PSK Reporter website is very useful in that regard.

I was pleased to find 50MHz open last Saturday afternoon – to Poland and Germany mostly – I even found some new squares! Signals improved and improved and I decided to try 70MHz. OK1VBN was a great signal who I was able to work – and nice to work YO2LAM for a new square. 9A2SB was around too. Quite late in the season for 70MHz Es. Although I didn’t work it, there was apparently some Es+TEP to southern African on 50MHz, with ZS6WN being worked from the UK. On Sunday, 50MHz was open again but with weaker signals and nothing on 70MHz that I could detect.

The Virtual Radar experiment is proving quite interesting on 1090MHz with planes showing up over distances of 50-60 miles on a regular basis. I am looking forward to seeing what happens in tropo conditions.

A pair of replacement 4CX350As have been found – following the demise of the valve in the ‘melted aerial’ incident – so will be able to get the 144MHz amp going again. 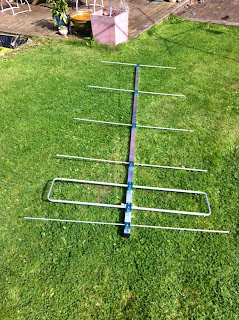 The new Innovantennas 6el yagi is constructed and awaiting some testing – I was hoping to do that last weekend, but a bad cold got in the way. As it may be a little time before I can get the 6el up on the mast, I may even hook it up on a stepladder in the back garden and point it at the moon and see what happens.

All good fun and plenty going on!