The VCXO-AXE WSPR transmitter has now been put into a plastic project box and lettered with Dymo tape. I think it looks rather smart even if I say so myself. 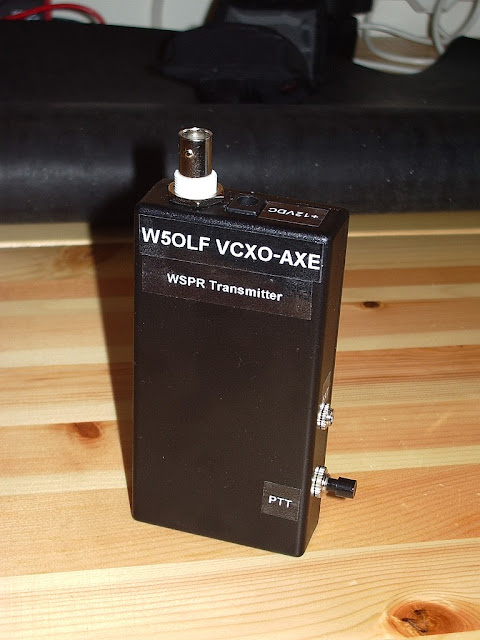 It did think about building it into a box that contained the batteries as well but that would have made it larger and prevent the batteries being used for something else. Plus I already had a box that fit the transmitter by itself. So what I now have is a pocket WSPR handy. Imagine going to the park or the beach or a hilltop and sending a signal that could be received half way round the world using a battery powered radio you can hold in your hand. How cool would that be?

Unfortunately the charger that charged my 10 AA cell NiMH QRP battery pack decided to fail and I’d exhausted the batteries during my initial tests so I couldn’t try portable operation unless I first spent a day charging the cells up 4 at a time. So I decided to see how far my 30m WSPR signals would get using a selection of hand held QRP antennas with the rig running off the bench power supply in the shack. As most of the antennas are equipped with right-angle PL-259 connectors for attachment to the back of an FT-817 I attached them to the back of my SWR/power meter with a short patch lead connecting it to the VCXO-AXE. For an RF ground I used the nearby central heating radiator. 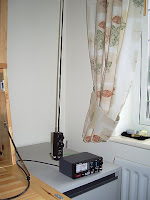 The Wonder Wand L-Whip produced several spots from as far afield as Italy during the morning. 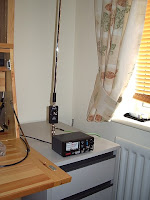 The Miracle Ducker with 1.4m telescopic whip was somewhat less successful, though as I tested it at a different time of day it would perhaps be wrong to draw any conclusion from that. I used the MD with the radiator counterpoise. Although it would give a reasonable SWR with no counterpoise at all the current drawn by the VCXO-AXE TX increased from around 300mA to 400mA which made me think the PA might not be happy so I decided not to test it like that. 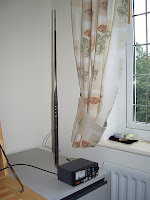 The most surprising result came from the ATX Walkabout antenna. For those unfamiliar with it, this is a small QRP antenna with a 1.4m telescopic whip and a base loading coil that is tapped for the 80m, 40m, 20m, 15m, 10m and 6m bands. To use the WARC bands with this antenna you have to use the tap for the next lower band and then obtain resonance by shortening the whip. On 30m the whip length is only about 40cm! The length of coil that is in use (not shorted out) is about 15cm.

So this antenna when used on the 30m band is effectively less than 2 feet long! Despite that it produced several spots at quite respectable SNR levels. The SWR using the radiator ground was a rather poor 3:1. I suspect that this, and overall efficiency, would have been improved if I had used a quarter wave counterpoise, but I didn’t have 7.5m of wire handy and it would not have been practical to deploy it inside the shack in any case.

Obviously with a good antenna you will get stronger reports, be heard further afield and get more spots. But from the results of these tests it appears that even with a compromise hand held antenna (and a counterpoise for grounding) some interesting results could be possible using this little WSPR transmitter. Great fun!