A Winter Trip to Greenland 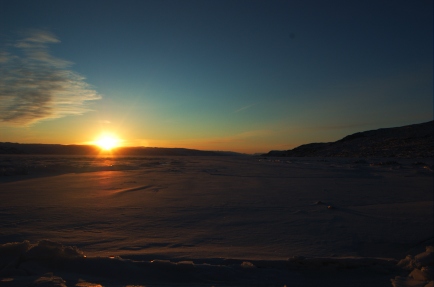 Last year, I managed to scrape together some equipment funds at work to buy a small spectrograph system for studying atmospheric light emissions (airglow and aurora).  A co-worker secured the funds and contacts for us to install it at an observatory in Greenland.  Because we need to make the measurements at night, and because the instrument was delivered in early December, we made immediate plans to go to Greenland as soon as possible.  (Sarah is certainly laughing at this point because the plans were actually far from immediate and we bought our passage just over one week before departure.)

Greenland is only a short (4- to 6-hour) flight from the NE U.S., however the only route that operates in winter (and indeed the only commercial route) is on Air Greenland via Copenhagen, which operates four round-trip flights per week in winter.  This turned getting there into a two-day affair of perverse travel arrangements totaling over 12,000 air miles to go about 4200 miles round-trip on the great circle.  I met my co-worker, a United Airlines devotee (myself an American Airlines devotee), in Copenhagen and we flew to Kangerlussuaq (Sondrestrom) on Air Greenland. 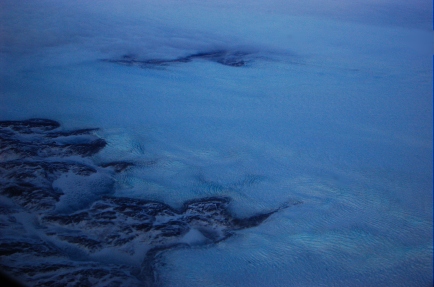 One of the things that strikes you about Greenland as you approach Kangerlussuaq is how otherworldly and remote it is.  Kangerlussuaq is the site of the former U.S. Sondrestrom Air Force Base, and one of two runways (the other is at Thule) on the island large enough to accommodate aircraft capable of flying to Greenland from abroad (this is a mild, although amusing exaggeration).  Air Greenland has its hub there, shuttling passengers off to towns around Greenland on twin-engine turboprops like the Dash-8.  It is, as our host explained, “…not your typical Greenland town.  It is far inland at the end of the fjord and not on the coast.  The only reason it exists is because of the airport.”  Fuel and supplies are all brought in from outside.  Like most current and former U.S. military installations worldwide, it is reliant on diesel fuel for its on-going existence.  It’s sobering to be someplace that is totally unsustainable, although one might argue similarly of many U.S. cities, but I digress.

Kangerlussuaq is also near “the dog line,” north of which sled dogs are very common.  Here is one of the two road hazard signs we saw while driving around…dogsled crossing: 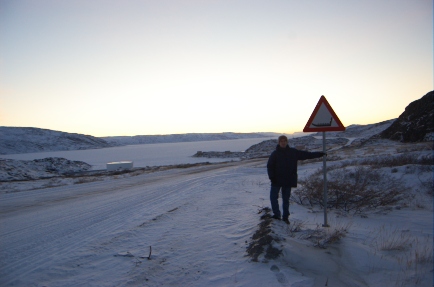 The instrument set up easily the first afternoon and we were able to collect some data with it that night.  As we were setting the instrument up, we heard reports of an Earth-directed CME from the Sun and hoped for aurora over the next few days. We were not disappointed…

The second night, I stood “aurora watch” in the cold while my warm-blooded co-worker processed the previous night’s data.  Soon, I saw some faint cloudy white sheets way down on the horizon and I ran back in to alert him and retrieve the camera tripod.  This photograph was taken facing toward the east southeast. 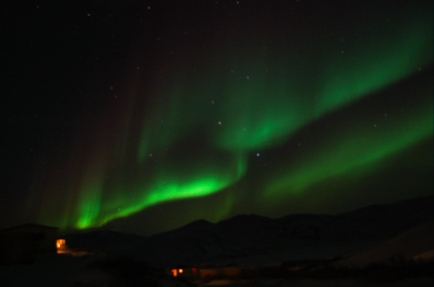 And, the 3.5-MW peak L-band incoherent scatter radar was running.  The dish is blurred because it is moving. 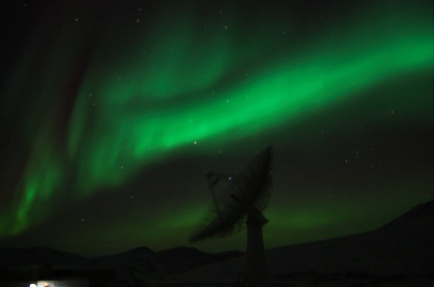 And, here is a shot of my fan dipole strung up on the DK9SQ mast. 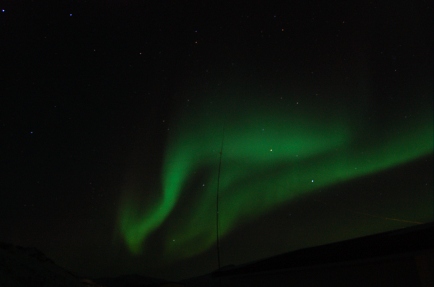 Speaking of radio, I did manage to make a few QSOs as OX/K8GU on 17 meters, but not as many as I would have liked.  The combination of high absorption in the auroral oval (mostly to our south during our stay), little sunlight, a poor low-angle shot (required to avoid the auroral zone) to North America, short openings, and the fact that we were well-occupied with work for the four days we were there conspired to keep my contact count low.  QSOs will go into LoTW soon—the certificate was issued yesterday.  I have not yet designed a card, but there will be a special card.  Thanks to those who did contact me.

7 Responses to “A Winter Trip to Greenland”