Today is a special day if you’re of Polish descent, Catholic, and a Ham Radio operator.  Today is the feast day of St. Maximilian Kolbe.  For those of you who are not Catholic, a Saint’s Feast Day commemorates the day that the faithful believe that the Saint left this earthly existence, directly heading to Heaven for his or her eternal reward.

It was on August 14, 1941, that Father Maximilian Kolbe, a Franciscan friar died from an injection of carbolic acid.  Fr. Kolbe was a detainee at Auschwitz, during WWII. He was sent there for the crime of providing shelter and safe harbor to over 2,000 Polish Jews in his friary at Niepokalanów. 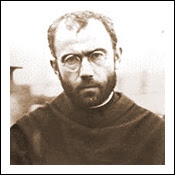 At the end of July 1941, three prisoners disappeared from Auschwitz, during what appeared to be a successful prison break.  To retaliate, the deputy camp commander picked out 10 men at random to be starved to death.  One of the chosen men, Franciszek Gajowniczek, cried out that he had a wife and children and begged for mercy.  Fr. Kolbe heard this and asked, and was granted permission to take Gajowniczek’s place.

In the starvation bunker where the condemned men were being kept, Fr. Kolbe celebrated Mass each day and led the men in hymns and prayers.  Two weeks later, after all the men had passed, Fr. Kolbe was the last condemned prisoner left alive. The Nazi’s had other plans for that bunker, so to end it all, Fr. Kolbe was given the lethal injection.

But during his lifetime here on earth, Fr. Max was unique among Saints, as he was an Amateur Radio operator.  His call sign was SP3RN, and this might be the only photo in existence of him “at the key”, so to speak. 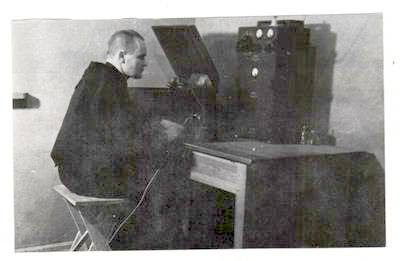 I had heard of Fr. Kolbe a lot during my younger years, being a student in a Catholic school that was part of the Polish Ethnic Parish that I grew up in, St. Mary of Ostrobrama in South River, NJ.  It wasn’t until after I became a Ham myself, that I was made aware of the radio connection.
Fr. Kolbe was elevated to Sainthood by Pope John Paul II in 1982.  He is the unofficial patron saint of Ham Radio operators everywhere.
Saint-Max, módl się za nami!
72 de Larry W2LJ
QRP – When you care to send the very least!
Larry Makoski, W2LJ, is a regular contributor to AmateurRadio.com and writes from New Jersey, USA. Contact him at [email protected].

4 Responses to “A very special day”