A swap around of the mobile rigs, 28MHz mobile and a lot of JT65A…

I’ve been working on a review of the Wouxun KG-UV920 for Practical Wireless over the last week or two. All done now and you’ll hopefully see the review in around a month. With the Wouxun out of the car I’ve decided to have the FT-7900 in the car for a while rather than the FT-8900. The 8900 is now in the shack and working out quite well.

For example I can scan a bunch of repeater channels and monitor 145.500. A couple of contacts have resulted already. Interestingly, although the 8900 is on a triband collinear for 50/144/432MHz, on a couple of days when 29MHz has been open, I’ve heard stations quite well. I may turn the power down and see what can be worked!

In the car, I’ve replaced another magmount and am back on 28MHz mobile which is good. Heard an A4 on 29.600MHz FM yesterday. Keen to try and work some 29MHz AM as well!

I’ve been quite active on 28MHz JT65A over the last few days too with some nice QSOs into South America in the evening. I was excited to work A61BK this afternoon – and even more excited when Khalid posted a picture of the QSO on Twitter! 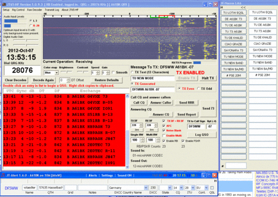