A review of the Elecraft K-Pod 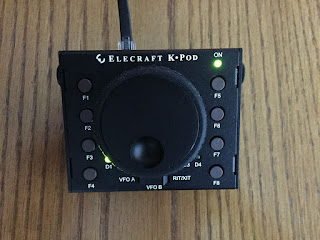 When I first opened the box I noticed it was packed very well and as I held the K-Pod for the first time I noticed it had some weight to it. The K-Pod is built very solid and would not move around on the radio desk as you used it. There is a tilt stand that places the K-Pod at a very nice operating angle, this stand can be removed if you would rather have the K-Pod sit flat on your desk. The VFO is very smooth and the user is able to adjust the drag if need be but I was very happy with the VFO right out of the box. There are 8 buttons on the K-Pod that can be programmed with macros, each button has a tap and hold function you therefore have 16 macros. Macros are a great way to have a one button push (or hold) to control a commonly used button on the K3. Also Macros can be used to preform a multi task function. For example I have programmed a CW Split macro that puts the K3 in CW mode, sets VFO A and B to the same frequency, moves VFO B up 2 kHz, sets the filter to 400 Hz, clear both the RIT and XIT and locks VFO A on frequency. All this is done with the push of one button. The instruction manual gives you many Macros to choose from. You can program your own and try them out using the K3 utility program on your PC. On Elecraft's website you can download free of charge their programers reference to learn more about macros and programming them.
There is a rocker switch that will allow you to smoothly switch from VFO A (LED D1 lights up) to B (LED D2 lights up) and then to RIT/RXT (LED D3 lights up) adjustments. The manual says that LED4 is user programable and you can actually control the on/off function of D1, D2 and D3 as well.
On the top of the K-Pod there are 4 connection ports:

This was a nice addition to my K3 as for me it's handy to have the VFO control right beside the key. For contests I am able to program the first 3 (or more if needed) macro buttons for contest macros. The K-Pod worked right out of the box once powered up and connected to the K3 you had immediate VFO control, A/B VFO switching and RIT/XIT as well. It was then time to learn about macro programming.
There were just some minor issues I have:

A. All cables have to be disconnected from the K-Pod
B. Connect the USB cable to your PC
C. While holding F1 and F4 on the K-Pod plug in the other end of the USB cable to the K-Pod.
D. You now start the K-Pod utility program and update it's firmware.

4. I found having the power cable and the RJ12 cable coming from the K-Pod a bit cumbersome. One of the main reasons for me doing the modification to the K3 so the K-Pod is powered via the RJ12 cable.
Mike Weir, VE9KK, is a regular contributor to AmateurRadio.com and writes from New Brunswick, Canada. Contact him at [email protected].

16 Responses to “A review of the Elecraft K-Pod”