A project for the holiday: Packet Radio and the International Space Station

I’ve got the luxury of two weeks off work for the holidays – having not managed to take much holiday earlier in the year. It’s been fun, over the last few weeks, looking forward to some of the radio projects that I want to do over the time. More on that in some upcoming posts.

One of them, though, was to have a go at receiving the packet radio signals from the International Space Station, and perhaps, trying to send some signals through its’ digipeater.

Both Andrew, M6GTG and Berend PA3ARK had both mentioned it recently on Twitter and it seemed like a fun thing to do.

My last experience of packet radio was probably 20 years ago when I used the PK-232 TNC! Although it’s still around somewhere, I was keen not to go there. I started off thinking that I would use SV2AGW’s AGWPE (AGW Packet Engine) software, but in conversation with Pete, 2E0SQL, he suggested using UZ7HO’s Packet Soundmodem software which he felt worked better and was simpler to setup for this purpose. 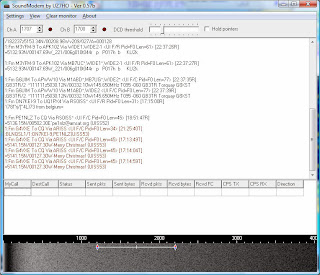 I downloaded the software and hooked up the FT8900 to the G4ZLP interface (fortunately it uses the same interface lead as the FT817). With an absolute minimum of effort, I ran the software up and changed the VFO on the rig to 144.800 the APRS frequency. Instantly I was seeing lots of packets being decoded. Good news!

The software that I had seen Berend PA3ARK use was UISS by ON6MU. It looked simple to use, had a nice map and most of all, seemed fun! I downloaded this and installed it – all good – but it complained that AGWPE was not installed. Hmmm – I don’t want to use it, I want to use UZ7HO…. 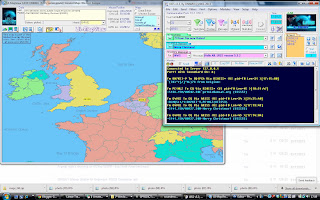 After a little digging, I discovered that the way around this is to go into Setup/Section/LAN Internet in UISS and enable the LAN setup. Point it at the local IP address (127.0.0.1) and port 8000, remembering to click ‘Enable LAN Mode’

That did the trick – then – all the stations that I was hearing on 144.800 displayed in the packet window on UISS and those with a position, were plotted on the map.

I have listened for 2 or 3 passes of the ISS and have received some frames from PE1NLZ and ON7KEI – but it was all running in unattended mode, so was not able to bounce any signals through the digipeater. I hope to try this over the holiday period.

The antenna I am using for this is the V2000 vertical on the roof. Signals, so far, have not been great from the ISS digi. I may resort to taking it all outside and using the Elk yagi! However, we will have to wait for the weather to get better.

One Response to “A project for the holiday: Packet Radio and the International Space Station”