There was a knock on the door this morning and the postman asked me to sign for a parcel from overseas. The customs declaration amusingly – if appropriately – described the item as “Toy”. It was the UNI-T UT-81B Oscilloscope Digital Multimeter that I ordered last weekend from eBay seller hk360radio in Hong Kong. 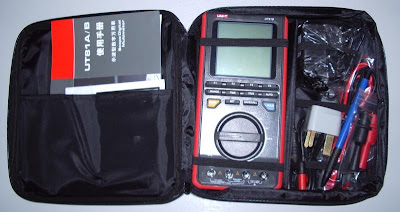 My first thought on opening the box was: “Wow! All this for a hundred quid? Amazing!” Inside the zip-up fabric carry case was the scope/multimeter, test probes, a BNC oscilloscope probe adapter, an opto-isolated USB cable for connecting the instrument to a PC, a two-pin wall-wart power supply and a two-pin to UK three-pin mains adapter, manual and CD containing the PC software.

The instrument is both a multimeter and a storage oscilloscope. The multimeter is auto-ranging, so the control switch simply selects the function: voltage, current, resistance etc. It measures DC voltages to 1000V, AC to 750V, current to 10A, resistance to 10M, capacitance to 100u and frequency to 10MHz. There is also a continuity tester. It can read volts down to 100uV and current down to 0.1uA. The frequency counter accuracy isn’t good enough to calibrate your radio, but it’s still quite handy. 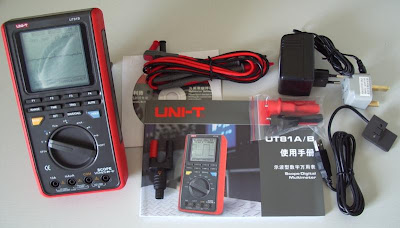 Many years ago, back before I had a ham radio license, I had an oscilloscope that I built from a design in Radio Constructor magazine. It only covered up to about 200kHz and wasn’t calibrated. I had to sell it when I left my parents home and had nowhere to keep so much electronic stuff, and I haven’t had one since. But there have often been occasions when I wished I had one, so that was one of the main reasons for buying the UT-81B.

The oscilloscope bandwidth of the UT-81B model is quoted as 8MHz, so I can’t use it as a monitor scope for the whole of HF, but it covers up to 40m at least. I was very keen to try this. I connected my FT-817 up to my QRP power meter via a T-piece and connected a cable between that and the oscilloscope. When I spoke into the microphone I could see the modulation envelope on the display. 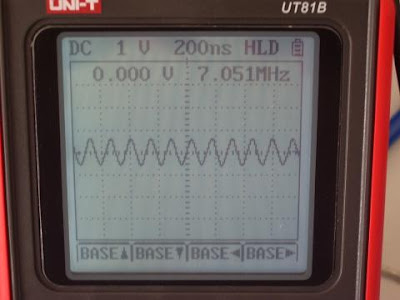 I was interested to see whether the horizontal scan rate was fast enough that I could see the actual RF waveform. I increased the timebase speed until I was able to see the display above of the carrier wave from the FT-817 in CW mode. The sample rate is given as 40MHz and you can just see that the waveform is a little jagged. You can see that the scope has also displayed the frequency to within 1kHz. There is a full range of trigger functions and also a manual hold you can press to capture the display, which I used to take the photo above.

There is a Windows software application that connects to the instrument via a USB port. It can log measurements over time and also capture scope displays and save them to a bitmap (BMP) file. I was able to capture the waveform shown in the photo. However it was not able to capture an RF modulation envelope when sampling the RF at a much slower time base setting. I just got a thin wiggly line that seemed to bear no relation to the envelope displayed on the scope itself. Not a major issue, though.