A low power FM transmitter with your Raspberry Pi

After seeing the piece about making the Raspberry Pi into a WSPR transmitter, I was also intrigued that it could be made to be an FM transmitter using the PiFM code.

Sure enough it can! I followed the instructions on the Imperial College Robotics website then downloaded the code and compiled it up. The default sound file that’s transmitted is a simple tone, but you could easily record a WAV file announcing your callsign!

What a clever bit of code by Oliver Mattos and Oskar Weigl! I’m not a bad programmer, but I wouldn’t have known where to start with this!

I didn’t even bother putting an aerial on the GPIO pin – I wasn’t looking for DX! The RF signal was strong enough to be detected by handheld receivers on the desk.

Great fun! Just the sort of thing for a snowy March day. 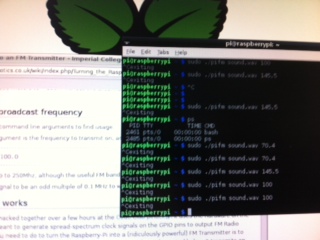 I am so pleased with the Raspberry Pi. What fun I have had with it, since I got it at Christmas. Unwisely, I have agreed to do a talk about ‘Life of My Pi’ at the Harwell Amateur Radio Club on April 9th. I’d better get around to preparing it, but there’s certainly going to be plenty of material.