This past weekend I was rolling along in the CWop open CW contest when all of a sudden when I sent CW my Icom 7610 shut down and then cycled back on all on its own. My output power was 100 watts and each time I transmitted the rig would cycle off and back on again. I had already been contesting for about 3 hours and all was good and now this!

With the contest completed and still hearing CW rings in my ear, it was now time to turn my attention back to the 7610 power cycling issue. I subscribe to Groups.io which is an email group and one of my email groups is called Icom 7610 you guessed it, it's all about the Icom 7610. I read the threads regarding power cycling and the Anderson power pole. The consensus seemed to be the connection point of these connectors can develop a poor connection. The fix some used was like I did to connect and reconnect a few times. While others removed that style of connector altogether.

On the Icom touch screen, you can bring up a menu called meters. One of the meters is the Vd. This meter reads the real-time internal voltage of the 7610. On the scale, there is a red section and if the voltage gets to this point the radio will shut down. Once the sufficient voltage is supplied again the radio will cycle on again. Thus the issue I was having. When I was transmitting I was drawing much more current then bring in a poor connection (resistance) thus drawing more current. When you draw more current your voltage goes down and if it goes below what the Icom 7610 wants the radio shuts down. As soon as it shuts down more than enough voltage is available as very little current is being used and the radio cycles back on again.

I wanted to see if the Anderson power poles have in my case become an issue. My test was set up as follows. I wanted to have a steady constant load on the Icom 7610 and what better way than to transmit an FT8 tune signal, I choose to use 100 watts. I would connect the radio as it was during the contest and then send an FT8 carrier at 100 watts. Record the voltage drop on the Icom Vd meter. Then remove the Anderson power poles from the Rig runner. One is the power cord from the radio, the other from the power supply to the Rig runner. Run the same test and record the results. finally, remove the Anderson power poles from the cable from the Icom and connect it directly to the Astron SS-30-M power supply which has screw terminals. Then record the results.

For the second test, I removed the Rig runner and connected the two Anderson power poles one to the other. The FT8 100-watt test tune gave the same results,  two hatch marks from the trip red line.

Finally, I removed the Anderson power pole from the radio power cord and stripped the ends and attached it directly to the Astron power supply via its screw connectors. The FT8 100 watts test resulted in a surprising result of 5 hatch marks above the red trip line. 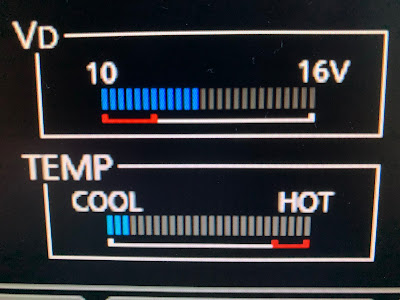 Removing the Anderson power poles from the circuit seemed to give some impressive results and I am going to leave it this way. If I need to use the Rig runner power bar I can power it from a spare Astron 25 amp supply I have. Once I have some spare time I am going to take the pair of Anderson power pole connectors apart and see if I can find what did possibly wrong.
Mike Weir, VE9KK, is a regular contributor to AmateurRadio.com and writes from New Brunswick, Canada. Contact him at [email protected].

6 Responses to “A little resistance goes a long way!”