A keyboard is a keyboard……….but is it? 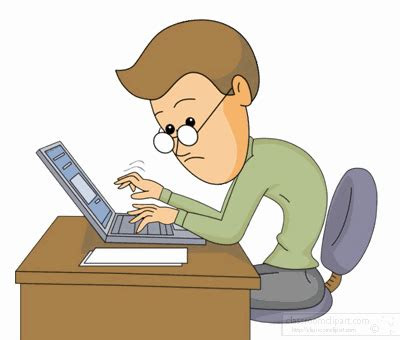 As frequent readers of my blog, you know my interest in contesting, and specifically CW contesting. Just a few weeks ago, for the first time, I called CQ in a contest and was running for the entire contest. I had a great time and also a time of growing. As with all bloggers, we have different keyboarding levels. To be a blogger, you have to be somewhat of a typist. There are single finger, two-finger and home row typists. There is a saying "mom knows best" and well in grade 7 I was not so sure about that saying. You see, I had what was called in school a spare period. It was a time slot with no class, and really it was my first one ever, and I planned it as a rest time. Well, mom knows best, and she had to sign off on my spare period and well she had other plans for me.

She looked at my school timetable and the available classes for my so-called spare period. She found a class that fit right into the spare period time slot..........TYPING.....yup that's right typing! With my mom it's not a suggestion.....it's "your taking typing, and you will end up thanking me for it one day" I went to school in the '70s, and you know how many guys were in typing class.........ME!

In I went and well there was a positive note and that is it was a great place to meet girls anyway I digress.  The first thing I noticed was you can't look at the keyboard to find the letters as there were no letters to be found, the keyboard was blank. To make a long story short I learned about something called home row and I can still hear the teacher calling out "AAA   BBB    EEE" and so on. I have to admit that yes, mom knows best, and I took 2 semesters of typing class. It made my university years way easier for term papers and so on.

Fast forward to now......getting a blog post together runs along very smoothly, BUT who would have thunk that my CW contest would benefit as well? I found that when I was running in a CW contest, having the ability to not look down at the keyboard was a bonus. I can hear the calls or exchange and just look at the PC screen and enter the information.

Here is the catch........ I can type, and my speed is ok for blogging, but typing a call sign and then an exchange at 25-34 WPM takes practice. In the past I felt keyboard was a  keyboard right ?? Well, I found over time, frustration and trial and error that all keyboards for contesting anyway are not alike. 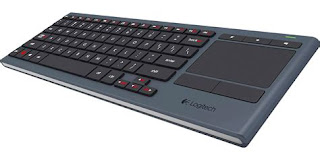 The keyboard of choice for the longest time was the wireless Logitech k830. It was a smaller keyboard that had a mouse pad. The keys had a soft touch, meaning not much pressure was needed when typing. Also, the keys were close together therefore no ambidextrous finger moves to hit certain letters were needed.

When practicing with this keyboard for CW contest call sign copying at slower speeds it was good but up around 25 WPM, I found myself hitting two keys at once a lot. At 25 WPM when this happens you lose track of the next letters coming at you, and it can get frustrating.  The Logitech keyboard is not going to cut it. 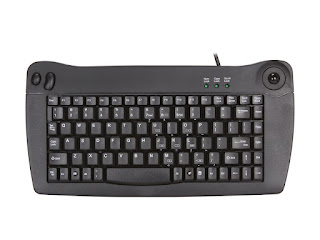 I went through my PC junk box and found a keyboard called Adesso this was a small keyboard as well, but with much firmer keys that were raised a bit higher than the Logitech keyboard. I gave this one a go and yes I was not hitting two letters at once but when the CW speed increased again there were issues but again. With firmer keys, I needed to give an extra effort to press each key and at higher CW speeds it just took too much time to enter the needed info from a contact. Once you miss a letter, your concentration is removed from the CW program and  to the keyboard and hence calls and exchanges are missed.

I have heard it said that most times the solution is right under your nose, and you just can't see it. This was the case with the perfect keyboard. My wife was working from home during the height of the pandemic, and for some time that has not been the case. Her company PC has sat ideal at home for some time now along with a KEYBOARD! It was a full size keyboard, much different from my other go-to keyboards, but I thought I would give it a go. This keyboard is a Lenovo Pro 2 and when she requires it again I have already scoped them out online. I am thinking I will purchase one as a New Years gift for myself. 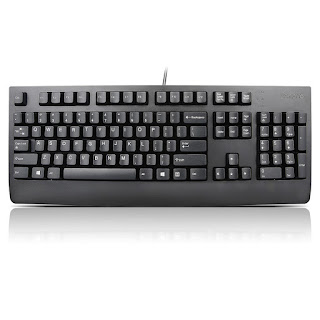 I have been using it for about 2 weeks now, and it's amazing, the keys are the right height and key sensitivity is spot on as well. Not only that, but I am having no issues copying calls and exchanges around 33-35 wpm.  So no, a keyboard is a keyboard is not true. I found that it's a personal thing and once you get the right keyboard for you, it sure can make a differance ....in contesting anyway.