A Great Day of Mountaintop Radio 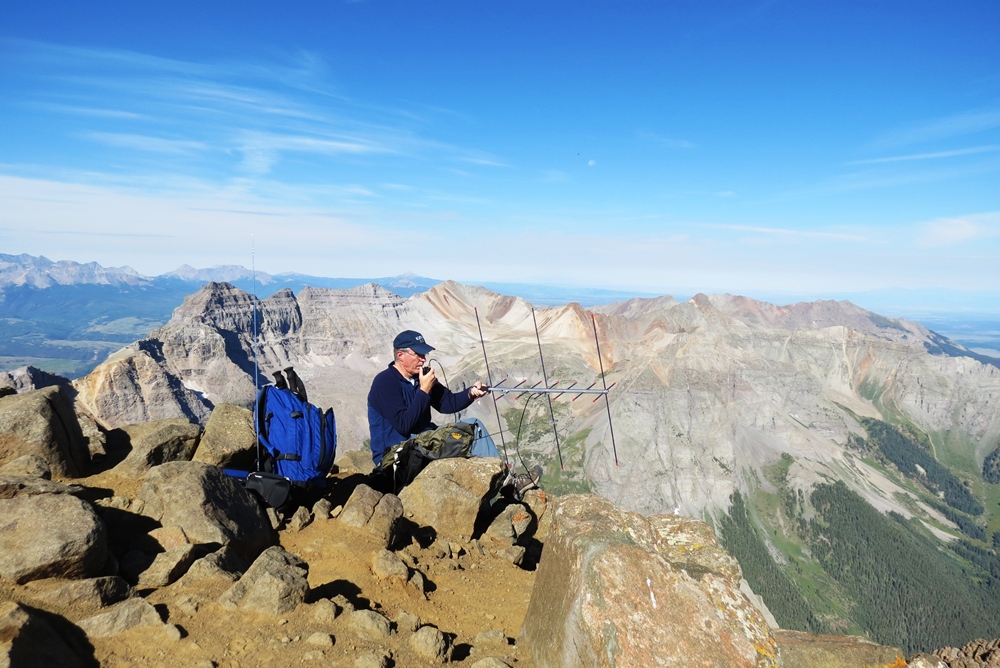 Here is the report on the Colorado 14er Event operation from Mount Sneffels. Joyce K0JJW and I drove our Jeep up to the “upper trailhead” for Sneffels, arriving at 6 AM. The 14ers.com web site describes the trailhead and route.
On paper, the climb is not that difficult but there is quite a bit of loose rock that you have to navigate…annoying on the ascent and very tiring on the descent. We reached the summit at 9AM and fired up the radio gear.

Mt Sneffels (and the other peaks in the San Juans) is a long distance from many of the fourteeners. Take a look at the fourteener map on 14ers.com. Previously, I had operated from Pikes Peak where you hear tons of stations calling and Mount Antero which is centrally located so you can easily work all of the 14ers. Operating from Mt Sneffels is different — kind of like you have fallen off the edge of the earth.

We soon found that the omnidirectional antennas were not that effective at pulling out the other 14er stations and that the Arrow II yagi antenna was the way to go. I’ll so some more analysis on this later.

Most of the contacts were made with the Yaesu FT-817 but we also used a pair of HTs. Note that we used both FM and SSB.

I had my Yaesu VX-8GR burping out APRS packets for the upper half of the hike but it appears they only made it to an IGate when we were on the summit.

The weather was awesome so we stayed on the summit until 11:40 AM. After we finally worked Pikes, we decided to head down. The clouds were building but we did not expect it to amount to much. But the storm moved in quickly and we did get snowed on while hiking down.

Joyce ended up logging for me and pointing the antenna, so she only worked Glen WE7C on 147.42 MHz. She also got to explain to the other hikers what the heck we were doing. People seemed genuinely interested and when we told them we just talked to Quandary or Evans, they’d say “that’s cool.”

This was a Summits On the Air activation, the first ever for Mount Sneffels (W0/UR-001). All in all, a good day playing ham radio in the mountains.

Thanks to everyone that came out to play.