It was nice to hear from Mark M0DEV following our exchange of WSPR signals on 144MHz. It turned out that I was the most distant WSPR signal that he’d heard on 144MHz at that point. We decided it would be fun to try a QSO and decided that since we both used JT65-HF regularly, we’d use that rather than the more usual variant for VHF/UHF JT65B.

Running 10W at each end, both into collinears, it was an easy QSO over a path of around 140km. Not massive DX of course, but very satisfying. Following a successful exchange of signals we then turned down our power as low as it would go – around 1W in my case and were still easy able to exchange signals. Mark calculated that given the conditions at the time, around 150mW would have probably done the trick. Sadly I can’t run that little power – at least not readily! 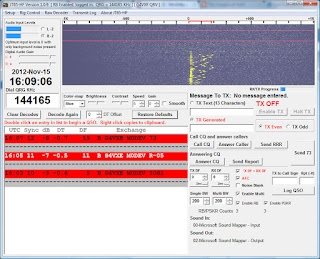 Incidentally, Mark M0DEV has an interesting blog called ‘The Margins of Radio’
Conditions were clearly good and I’d been seeing tweets from stations on the east coast of the UK making some excellent QSOs on 432MHz during the day. I’d listened but had been disappointed. Following the QSO with Mark, I decided to take another tune around 432MHz. The first station that I heard was UT1FG/MM in JO00. It caused a double take, as I did not immediately hear the /MM! I tuned around and then was surprised to hear OE2CAL coming through. Not too strong and I did not think that I would stand much of a chance. I tuned up another 10khz and found OE5XBL coming through. He finished a QSO and I dropped my call in. To my delight he heard me! A nice QSO over 1127km – probably my best DX on 432MHz. Later on in the evening, I worked Hans DJ7GK at 1059km – another very nice QSO. Conditions faded for me shortly after working Hans, so I returned back to 144MHz WSPR.
Signals from M0DEV were excellent and we were joined by Steve G0LFP in Cheltenham and Dave G4FRE in Malvern. Colin G6AVK in Rayleigh, Essex was hearing us all which was great. Colin was seeing a considerable amount of aircraft scatter on my signals, not too surprising with Heathrow airspace being in the middle of the path between us!
Tim Kirby, G4VXE, is a regular contributor to AmateurRadio.com and writes from Oxfordshire, England. Contact him at [email protected].