is one where I can rack up at least 4 QSOs during lunchtime. Today was such a day.

The QSO with Greg N4KGL intrigued me. Greg also does the lunchtime QRP portable ops thing, and we have hooked up several times.  He uses a KX3 to an Alex Loop.  He was a good 579 / 589 into New Jersey and the Alex Loop was doing a superb job getting his 5 Watts up here in good shape.  I may have to look into magnetic loops as a serious option for QRP portable ops. 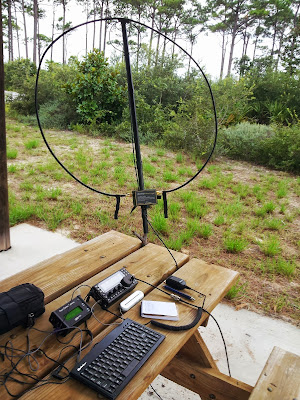 On another note, sometimes, when you collect a lot of Ham paraphernalia over the years, you forget some of the stuff you already have. I am a case in point.  The other day, I was in correspondence with a fellow Ham who was looking for a very small, miniature straight key. I e-mailed him that I had one and was willing to part with it. In turn, I received an e-mail back, asking for a photo. I was searching the shack for it last night, for picture taking purposes, only to suddenly remember that I sold that very key along with my K1. It was part of the package that I had put together, back when I was trying to raise funds for my KX3.  I sheepishly informed the inquiring Amateur that I no longer had it (losing your memory is a terrible thing!), and was feeling bad for having given him inaccurate information. I was relieved as everything turned out all right.  He informed me that a friend of his had actually given him exactly what he was looking for, and that it met his needs very well.

But during my search for the straight key, I came across a Viz Key that I had purchased about 7 years or so ago. I had totally forgotten that I had it 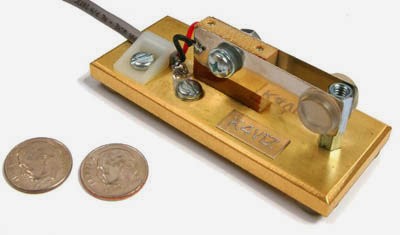 And that was a fortuitous discovery, as for a while now, I have been trying to settle on a key to stick in with my KX3 in my portable QRP ops bag.  I was originally using an American Morse “Dirt Cheap Paddle”.  It was very good and had an excellent feel, but was just a bit too light for my hand. When I’m doing these lunchtime ops, I like to hold the paddle in my left hand and squeeze the levers with my right hand. Call me crazy, call me weird but that’s what works best for me. When I would try to find the “sweet spot” for the DCP in my hand, I seemed to always accidentally squeeze the paddle levers at the wrong time and would send out a string of inadvertent dits. Next I tried a TE-NE-KEY, but I just couldn’t get used to the feel of that at all. I ended up making more mistakes with it than I do when I am on a bug!  So I had resorted to using a White Rook MK-33 single lever paddle that I had. That was actually too light also, but I overlooked that, as I absolutely love single lever paddles.

The Viz Key is an iambic paddle, but it’s a bit heftier than what I have been using, without being too hefty (it weighs in at 8 oz. or just 1/2 pound).  It’s just the right weight for me, whether it is in my hand or on whatever table I happen to be sitting at. It is stable without being cumbersome. If I was hiking for a long period of time, I’d probably switch back to the White Rook, but the small amount of weight savings is not a concern for me right now.  I used the Viz Key for my QSOs today, and it took a few minutes of getting used to again.  But very quickly, my sending became less error prone and I was able to make the QSOs that I did make without sending the Hams on the opposite end into a messy Morse Code frenzy.