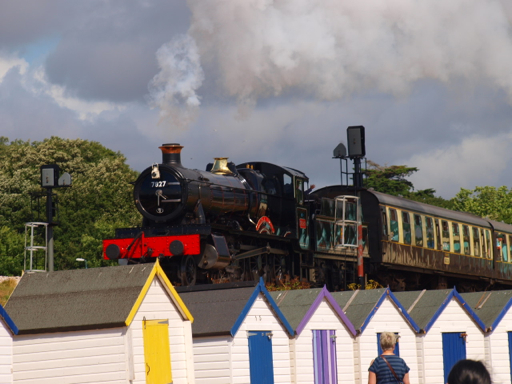 We’ve just returned from an excellent week’s holiday in South Devon. I took the picture at Goodrington Sands, which has the dual benefit of being a nice beach and having a steam railway behind it.

I listened on a few SO-50 passes, most of which were quite busy, but without managing to make any contacts.

However, I did take the plunge and try FO-29 for the first time. The lack of full duplex on the FT817 makes this a bit of a challenge, but thanks to some sage advice from Pete 2E0SQL on where to transmit and where to listen, I managed to work DG0ER for my first contact on this satellite. I heard some other interesting stations such as UA9CS as well, so must make an effort to feel a bit more competent on FO-29.

Back home today, after I’d finished writing the Practical Wireless column, I switched on and found 50 and 70MHz buzzing with Es. I was pleased to work IW9HII (JM67) on 70MHz for what must be my best DX on the band this summer at around 2000km as well as I3VWK. On 50MHz, I was pleased to work old pal T77C who was coming through nicely on CW.