A day by the lake

The fine weather we have enjoyed for several weeks was forecast to change, so on Wednesday Olga and I decided to take the bus and go for a picnic lunch by Bassenthwaite Lake. For radio entertainment I took the UV-3R (in case of any SOTA or WOTA activations) and the FT-817ND. 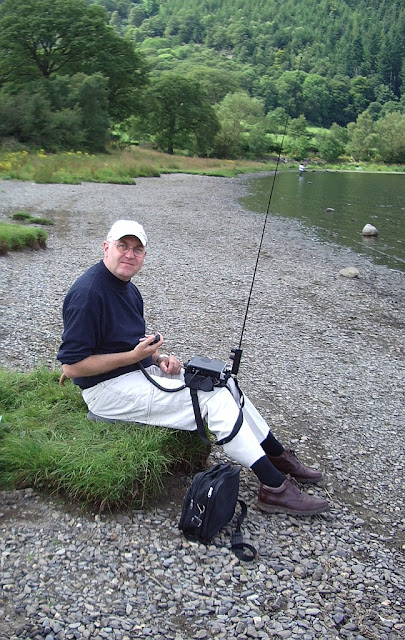 HF conditions were pretty dire – WWV has been predicting blackouts – and I initially heard nothing above 20m. But even though I called the loudest stations that weren’t calling “CQ DX outside Europe” no-one even acknowledged my existence. (What’s wrong with working stations inside Europe, I’d like to know, especially when no-one is replying to your CQs anyway?)

The antenna I was using, the Wonder Wand L-Whip, could have been better. It does, however, have the advantage that it is small and light. At the moment I can’t carry much, needing one hand for my walking stick and the other for balance, so everything has to fit in a small shoulder bag. So I didn’t have anything else suitable.

The UV-3R produced a contact with Terry, G0VWP/P activating Walla Crag, the lowest Wainwright, prompting Olga to comment that the small radio was better than the big one!

After lunch I tuned around some more and heard some activity on 15m and 17m. And whilst tuning 17m I stumbled across this. Actually, that’s what I heard a couple of minutes later after I’d dug my smartphone out of my jacket pocket to make the recording using Voice Recorder. What I heard first was ZD8D (Ascension Island) calling CQ. Repeatedly. With no takers. He was not very strong – about S4 on the ‘817 S-meter – with some QSB, but perfectly clear. Clearer in fact than in the recording. I called, but needless to say he didn’t hear me.

As I’ve said before, I have little interest in working stations just to tick countries off a list. But I have a particular interest in the British colonies of Ascension Island and St. Helena as I visited both places during a “trip of a lifetime” in 1999 but have never worked either of them. Just my luck to come across a DX station calling CQ with no pileup when I’m surrounded by mountains and running just 5W to an extremely inefficient antenna!

One Response to “A day by the lake”