A cheaper approach to Virtual Radar using the microADSB dongle

For quite sometime, I have been intrigued by the whole ADS-B Virtual Radar thing. As you know, if you’ve read this blog for a while, I love maps and plotting objects on them. I love planes too and whenever I look up and see a plane I always wonder where it has come from and where it is going to. Not to mention the propagation angle. ADS-B (Virtual Radar) operates at 1090MHz, so how interesting to have a set of beacon sources operating at around 1GHz and to be able to monitor propagation to and from them.

How to achieve it? Until recently, the only way to do it appeared to see some very interesting, if expensive units such as the SBS-3 Virtual Radar devices. These look great, well put together but seemed a lot of money for something that would probably not be a core part of the station here.

Dave G4FRE had told me of his experiments of using Ubuntu and the RTLSDR dongle to monitor ADS-B which looked effective and interesting. I did not really want to get into the whole Linux thing. I’ve nothing against Linux, but I spend my days looking into the technicalities of computer systems and though it is something that fascinates me it is not something I want to reproduce at home! I might give it a go in the future though. Dave has had some good results with his Ubuntu box and RTLSDR which does sound worth experimenting with.

However, talking to Mark VK3PI on Twitter he mentioned that he had got a lower cost ADS-B receiver which was showing good results.Mark had obtained a USB dongle from Miro LZ2RR called the microADSB The cost was modest compared to other solutions, so I placed an order.

The microADSB arrived on Thursday and I wasted no time getting it going. The package consists of the dongle itself, a CDROM of software, a USB cable from the dongle to the PC and a small magmount antenna terminated with an SMA that connects to the dongle.

Software installation was straightforward. On plugging the dongle in, I was prompted for the drivers which installed happily off the CD. The software that comes with the dongle is adsbScope. All I had to do to get it working was to select the virtual COM port that the dongle had attached to and then connect ADSB Scope to the dongle.

I was doing this at around 10pm at night with a few less planes flying, but I moved the antenna close to the window of the lounge on the ground floor and was soon seeing points plotted from the planes at surprising distances from home. Having got it all setup, I transported the laptop and the dongle upstairs to the shack, which has an easterly facing window and set it up. Range seems to be regularly 50-60 miles with occasional greater distances. 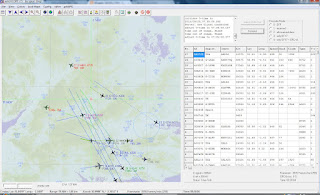 adsbScope allowed me to plot planes easily and it shows, where possible, the country of registration and the flight number, However, this didn’t entirely satisfy my curiosity about where the planes were flying to and from.

I had noticed an application called Virtual Radar server which runs as a webserver on your PC and picks up the data from adsbscope and augments it with information from a routes database and plots the planes on a nice Google map. I had to start adsbScope’s server functionality which Virtual Radar Server was able to read. Virtual Radar Server expects an SBS type installation, so I had to install a plugin called Database Writer which reproduced the basestation.sqb file/database which the SBS software seems to work on. I enabled the plugin and then allowed it to create the database file and granted it permissions to update it.

That did the trick! I was then able to browse to the URL which the Virtual Radar server provided on the local machine to see the planes plotted, along with the route information. I’m finding that so far, if I just want to get a sense of what propagation is like, I stick with adsbScope as that tells me all I need to know, but if I want a bit more information abut the flights, then I start up Virtual Radar Server. 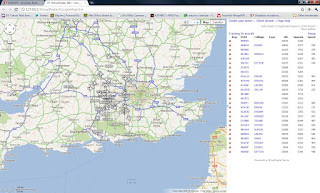 It would appear that you can add information such as aircraft sillhouettes and flags to the Virtual Radar output. I haven’t done that yet, but it looks as if it would just be a matter of placing the appropriate files in directories and pointing the server at them.
An interesting exercise all in all and so far, some quite interesting observations. The south east path is the best for me, given the way that the window faces, but I am finding I can see aircraft out across the Channel at cruising height. It will be interesting to see what happens when there is a temperature inversion. Already, I have noted that reception on these paths is better in the mornings and evenings, as would be expected as the temperatures change. I had wondered whether I would need to install an outdoor antenna for 1090MHz, but it doesn’t seem to be necessary, although I’ve a feeling that getting an antenna up high and in the clear would yield still more interesting results.
Thanks to Mark VK3PI and Dave G4FRE for their encouragement to get this going. And of course to Julie, who didn’t seem TOO horrified when she saw planes displayed on my laptop and said, ‘You’re watching planes as well?’