A birthday to forget

As you may have noticed, I have been experimenting with making software instruction videos. APRSISCE/32 has been the beneficiary of my attempts, but my real intention has been to make videos that would bring traffic back to the website that for the last few years has provided us with a living. For the core of the videos – and for APRSISCE/32 videos – the screen capture software I have been using (BB Flashback Express) is good enough. But I wanted to make the videos more professional by including shots of me talking to camera – which meant that I needed to buy a camcorder and get to grips with video editing software.

I ordered by post an AgfaPhoto camcorder which captured good quality video, though the sound level was low. I struggled with the supplied Arcsoft Total Media Extreme software. Eventually, and quite by accident, I found that my work laptop which is running 64-bit Windows 7 had on it a program called Windows Live Movie Maker. This is a brilliantly designed piece of software and easy enough even for me to use. Unfortunately I found that the audio level on the video made with the camcorder was much lower than that recorded by the screen capture software. I tried reducing the level in BB Flashback to match that of the clips filmed using the camcorder, but once the video was uploaded to YouTube the audio was much quieter than other videos and even with the PC speakers turned up to the max you could hardly hear it.

Olga made a test clip using the video feature of her digital camera and the audio on that was much louder. So yesterday we decided the camcorder must have a fault and emailed to the supplier saying we wanted to return it. Not wanting to waste time we then went to Argos and bought a different camcorder, this time one from Hitachi, which had received good reviews. You can imagine the sinking feeling when, after waiting for the battery to charge up, we tried it only to find that the recorded audio level was no louder than on the Agfa.

I felt out of my depth, clueless with no idea what to do. Other people managed to upload videos to YouTube with speech you could hear – why was I finding it so difficult? I asked in a couple of familiar ham radio forums if anyone had experience of this and could offer some advice. One person explained how to change the audio level in Windows Live Movie Maker, but as I had already found, the volume slider was at maximum in the video clips and the only direction I could adjust the audio level was down. Few people seemed to have experience of using camcorders, most using smartphones or other pocket devices to make their YouTube submissions, which would not give the HD quality I was hoping for.

Olga, trying to be helpful because I was getting stressed, found what she thought was a Hitachi support forum. Twelve Hitachi technicians were online waiting to answer my questions, the site claimed. I wrote my question and immediately received the response that this had been passed to someone who was an expert in this particular field and I should pay £12 for an answer by email or £18 for a consultation by phone. Ready to try anything at this point, I handed over my credit card details, only to find that this was not Hitachi support at all, but some generic advice service claiming to answer all kinds of questions. More than 12 hours later we have not received any answer for our £12. 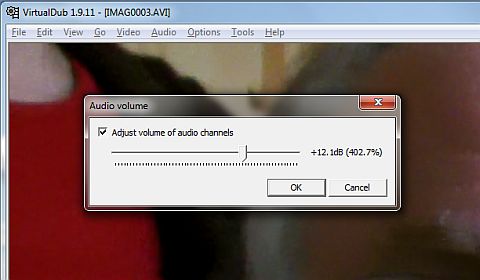 Eventually I stumbled upon a workaround. The Hitachi camcorder creates AVI files (unlike the Agfa whose video files are MOV.) Google found several answers to how to increase the audio in an AVI file, which suggests this is a common problem. Many of the answers were couched in gobbledygook I didn’t understand, using terms like “demux” that mean nothing to me. But eventually I found a “how to” procedure I could follow. It involved using a free utility called VirtualDub to rewrite the AVI file after processing and increasing the level of the audio track by 12dB. Even that didn’t work until I had visited a dodgy looking site and downloaded an iffy looking unofficial codec for the H.264 video encoding used by the Hitachi.

So I have a solution to the problem, though it’s a bit of a cumbersome one involving processing every video clip before I can start to assemble them in Movie Maker. To arrive at this point I have ended up buying two camcorders the first of which is probably not faulty as we first thought (it being unlikely they both are.) and been suckered into paying £12 to an internet scam site. This is not to mention the hours spent in front of the computer feeling frustrated and helpless on what was actually my birthday. Certainly not a birthday I particularly want to remember.

I think I’m getting too old for this tech stuff. I wish I could retire somewhere and keep chickens or something that did not require the use of computers at all. You would think that making home videos was something lots of people would want to do. Why is it so difficult?