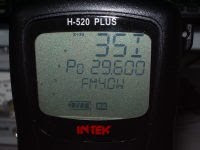 I made my first DX contact using a hand-held radio. It was a fine, warm day, so after lunch I left Olga doing things in the garden and went for a stroll with the H-520 10m FM radio. I took a footpath through fields to the north of the town that led up to the Carlisle road. It’s quite high up there, with great views down into the town and to the mountains beyond. However I was only carrying what would fit in my pockets, so the camera got left behind.

I used to take a 2m radio up there but I don’t think I ever made a contact so I lost interest. The other problem with that path is that you sometimes have to run the gauntlet of a herd of cattle. In the UK it’s illegal to put a bull into a field through which is a public right of way. However there is no such restriction on cows. They can be quite inquisitive, and there have been a few cases recently of people being knocked down and injured while walking through a field of cattle. It is quite frightening being followed across a field at less than the safe stopping distance by a couple of hundred tons of beefburgers in the making, as happened to Olga and I a couple of years ago. Shouting “horseradish sauce” at them has no effect at all!

Today, fortunately, the bovine creatures kept out of my way. I found a suitable operating spot, put the whip antenna on the Intek and started calling CQ. After a few minutes I had a call from Zdenek OK1AQW, coincidentally the same station that got away from me yesterday. Today he was strength 9 on the S meter, the same as Roger G0MWE had been from just a few miles away. We moved off the calling frequency and completed a solid 5 minute QSO, kept short only because Zdenek was receiving a lot of interference from other stations on the same frequency.

My report was initially 57, but was amended to 59 dropping to 51. At one point Zdenek informed me that I was coming over another British station that was calling on the frequency. He was running 100W to a quarter wave vertical and I think he was a bit surprised to hear I was running only 2.5W to a 140cm telescopic whip!

Incidentally it turns out OK1AQW doesn’t live near Prague at all as I wrote yesterday. His QRZ.com page is wrong. He is actually more than 100km east of Prague, about 10km from the Polish border, in locator JO80eb. I calculate that to be a distance of 888 miles or 1,430km. Not bad for a voice contact using a battery powered hand-held radio and whip antenna. Don’t you just love Sporadic E?

I didn’t manage any other contacts. I heard DO5DGH calling CQ repeatedly but he didn’t hear me. But this was a nice taste of what is possible. Some people might wonder why someone who owns nice radios like a K3 and even an FT-817 should put so much effort into trying to make contacts using a modified hand-held CB but I think to talk to someone direct using a battery powered self contained hand-held radio, without the aid of a satellite, a repeater or internet linking, is the ultimate challenge and far more exciting than anything I could achieve even if I had the full legal power, a tower and a beam!