Well Friday morning's planned 2m EME window got pushed to the side when 6m started to show some interesting propagation possibilities. Several Europeans had been working slowly westward, past their usual east coast stopping point. When EA8DBM (Alex) in the Canary Islands reported via the ON4KST 6m chat page that he was hearing a station in Montana, my ears really perked up. At around 10:30 local time, KE7V (Johnny), about 40 miles due south of me in Washington state, was heard working Alex but I could hear nothing from him at all.

As is often the case between here and KE7V, signals from Europe often move quickly northward and sure enough, about two minutes later, EA8DBM's CW signal appeared at good strength, calling CQ. 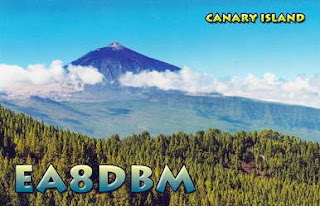 I quickly worked Alex, whose signal stayed around for almost an hour, and then began looking for any others that might be riding along on the same path. Sure enough, his neighbour, EA8TL was heard CQ'ing, but much weaker. After a few calls he came back with my report to which I responded several times, but it was evident that he was having difficulty as he kept repeating my report. Unfortunately, and unlike Alex, he soon faded away without me ever hearing the needed 'RR' for my signal report confirmation.

About an hour later, a rapidly fading and quickly building signal was heard on CW calling CQ at about 25wpm ... it was CN8KD in Rabat, Morocco!

It's times like this that 6m demonstrates why it's called the 'magic band', as exciting moments like this are so rare on the west coast ... the very thing that keeps us 6m nuts glued to the radio during the summer months.

I called Mohamed several times as his signal built, but his rapid-fire CQ's continued much to my frustration. As his signal peaked to a solid 569, he sent a '?' and then replied with 'VE6?', probably as shocked as I was. After repeating my call several times, he returned once again but this time with 'VE7NL?'. The next several transmissions from him were the same and as the delicate links between our two stations shifted once again, he was gone as quickly as he'd arrived ... close, but no cigar. This was the first 6m signal that I've ever heard from continental Africa since coming on the band in 1970. I wonder if I will ever hear him again.

With a dead 6m band on Saturday morning, I was able to get back on EME (JT65B mode) for my final day of favorable moonrise windows and had a nice surprise when VE1KG in Nova Scotia answered my first CQ, for initial #81 with my small station ... 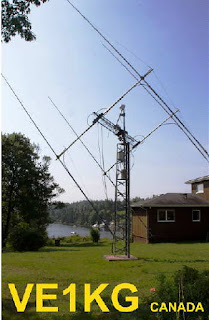