It's often easier to achieve high power on 630m or LF by combining lower powered amplifiers than it is to build a single high-power rig. A simple Class D push-pull switching FET amplifier can readily produce 400-500W when operated in the 35V range. Combining two such amplifiers, both sharing a common oscillator / driver stage, would yield 800-1000W output...probably much more than needed on 630m.

The low parts-count of the amplifier stage in the GW3UEP Class-E transmitter should easily produce 150-200W when run at a slightly higher drain voltage and proper heatsinking. Combining two such modules would yield 300-400W output at very low cost.

Combining can be done with a Two-Way (3-port) Wilkinson Splitter / Combiner. Splitters and Combiners are one and the same, depending on which ends are used for input(s) / output(s). When used in the 'combine' mode, insertion losses are virtually zero and mainly due to the miniscule resistive losses of the coils.

Combiner component values can be calculated the old fashioned way or by using one of the numerous online calculators. This excellent online video by Sebastian (KF5OBS) explains exactly how to calculate component values for the truly dedicated amongst us:

Courtesy: https://www.youtube.com
He also has a new video showing how to calculate values for combiners having more than two outputs, should you want to combine three or more individual amplifier modules.

The first combiner I built was for my 2200m kW and combined the output of two 500W Class-D modules: 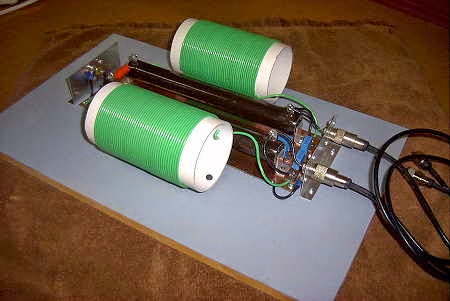 The air core coils are high-Q, cheap and easy to produce. If space is important, the inductors could just as easily be made using frequency-suitable powdered iron toroids, but at more expense. In actual operation, I have never been able to detect any heat from any of the combiner components, even when running a full kW at lengthy keydown periods of several minutes during QRSS transmissions, affirming the almost 'zero' insertion loss when used in the combining mode.

When I decided to use the same amplifier on 630m, a suitable circuit was designed and built for that band as well: 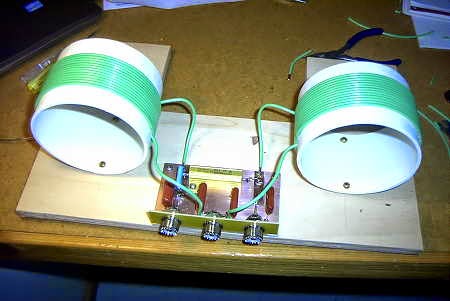 The terminating / balancing resistor (R) is used only as a safety device in case one of the two amplifiers fails during operation. It allows the still-working amplifier to safely dump some of its power into the load without destroying itself. Under normal operation, no current flows through this resistor so no power is wasted, assuming both inputs are equal. I have read of some schemes that will sense any current flow through 'R' and immediately shutdown the entire transmitter, thus allowing a resistor of lower dissipation to be used for 'R'.

Another benefit of the Wilkinson L-C Combiner is its filtering capability, as it works extremely well as a LPF. Neither my 2200m kW or 630m kW use any low-pass filtering other than that provided by the combiner's L-C network. It also seems to work well as a buffer of sorts, as both myself and VE7TIL noticed with our 2200m systems. We immediately stopped blowing FETs mysteriously when operating at full power. The amplifiers did not seem to react any longer to reactive components suddenly appearing in the antenna system or somewhere in the output network....everything was 100% more stable and reliable it seemed.

I can envision an exciting project consisting of a pair of GW3UEP finals feeding a toroid-based combiner, all in a very small footprint.

Should you choose to combine a pair of amplifiers for 630m, here are the values that were used in my own combiner: