An increasing number of electronic devices can be powered or charged from a USB socket. To charge them independently of the computer they usually come with a small switched mode wall-wart. Finding enough wall sockets for these broadband noise generators – in addition to all the wall-warts that already exist in the ham shack – can be a challenge. It would be nice if ham radio power supplies had a few 5V DC outputs.

When I started using my HTC Touch Pro smartphone as an APRS iGate I wanted to avoid using the HTC charger as I knew it created a few warblies on some of the HF bands. I wondered if I could power the phone from the shack supply instead. In the junk box I found a car charger for an old satnav that had the same mini-USB plug and fitted the cigar lighter type socket on my Diamond GSV3000 power supply. That seemed to do the job very well and didn’t appear to generate any RF noise (though the noise level here is now so high that the incremental difference made by one more switched mode device is hard to detect.) The only annoying thing about it was that it sticks rather a long way out of the front panel of the GSV3000, which is a bit of a nuisance on my narrow operating desk. 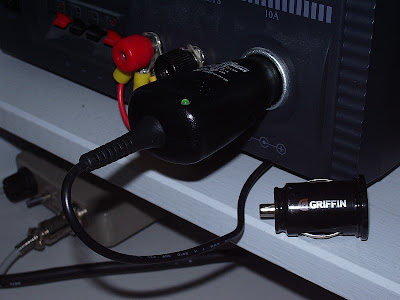 My next thought was that it would be nice to have more than one 5V outlet, perhaps in USB format, to occasionally charge other devices without requiring the computer to be on or plugging in another wall wart. Browsing eBay I saw a Griffin Dual Power USB Car Charger. This would give me two 5V USB outlets. And it was also designed to be flush with the top of the cigar lighter socket so it would look like an integral part of the GSV3000 once installed.

When it arrived I was quickly disappointed. As soon as I plugged a USB cable into one of the outlets, even with no load attached, broadband HF noise jumped up about 3 S-points. The device also got surprisingly hot even though nothing was drawing any current from it. I guess I should have anticipated that  a device that size would use some kind of switching regulator and that this might result in noise.  For the typical user wanting to power or charge two USB devices from their car, the noise is unlikely to be a problem. So I guess this particular solution to eliminating wall-warts is a non-starter.

One Response to “5V noise generator”