I’ve been wanting to do this for a long time. I wanted to try to compare the difference between various antennas for 2 metre band handhelds so as to see how much you lose using a small inconspicuous antenna or how much you gain by using an extra long one. The results were broadly as expected. The longer the better. But there were a couple of surprises. 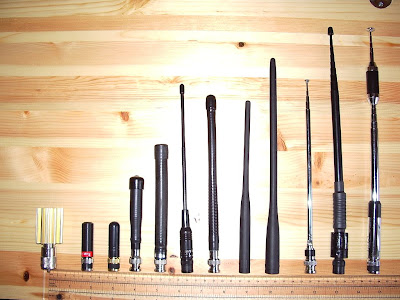 The efficiency of the antennas was compared using my Yaege FC-1 frequency counter, which has a relative dBm scale. I transmitted into each of the antennas in turn, noting the dBm reading on the FC-1 which was positioned a couple of metres away. This is hardly an antenna test range. However, the results were validated in on-air tests where various local amateurs were asked to report on my signal strength as I swapped antennas. The on-air results were in agreement with the measurements, which allow me to believe that they are a fair representation of the performance of these antennas in the real world.

As an aid to comparison, the performance is given as effective power out relative to a manufacturer supplied antenna driven with 5 watts. The antenna provided with the Yaesu VX-8GR is used as the reference antenna. Choosing a manufacturer supplied antenna turned out to be rather a poor reference, as although the Yaesu standard antenna performs very well, the antenna supplied with the Kenwood TH-D72 performed very poorly. It was 5dB down on the Yaesu antenna, putting it in the same range as the short stubby antennas. This is probably because the Kenwood antenna’s resonant frequency, as checked on my antenna analyzer, is around 158MHz. Although it would be reasonable to suspect a fault with the antenna supplied with my TH-D72, the one supplied with my Kenwood TH-F7E (which I have since sold) was identical. If you are using a Kenwood radio then you have even more reason to throw away the supplied antenna and buy a better one.

The antennas in the picture from left to right are:

Clearly one should not use such long antennas as the last three on a typical modern handheld radio with SMA antenna socket unless you are using a stout SMA to BNC adapter that tightens down to rest on the body of the radio so that no twisting moment is applied to the SMA socket. Even then, you may rightly be wary of using such a long antenna in the windy conditions often encountered on Lake District summits, which often bent the sprung base of the Black Whip into a 45 degree angle. Because of this I have made up a rucksack mount with a BNC socket and a 19in. quarter wave counterpoise so these high gain antennas can be used off the radio.

I was unable to test the free standing WOTA Pole (ribbon cable Slim Jim inside a plastic tube) under the same conditions but on-air reports suggest that it may give even more gain than the Black Whip. However, it isn’t always convenient to set up a guyed antenna on a summit, so one of these telescopic high gain antennas could be the answer to improving your signal when using a handheld radio.

These test results have related exclusively to the 2m band. I do not have test equipment that works up to 440MHz, nor is there any activity on 70cm in this part of the world so I have no plans to compare the performance of these antennas on UHF.