This past Friday night's wonderful propagation during the ARRL 160m CW Contest, pretty much went into the dumper for Saturday night's 1929 Bruce Kelley QSO Party, sponsored by the Antique Wireless Association.


In spite of the auroral-like conditions, with the K-index reaching level '5', the melodic tones from many of the old (and new) clunkers could be heard pounding out their annual 'CQ AWA' invitations.

Among my 19 contacts (8 on 40m and 11 80m), the highlight of the night was working W2ICE/1 in Maine on both 40 and 80m. In reality, this was Paul, N1BUG, operating Bruce Kelley's original 10 watt TNT, which rose to almost S9 levels on 40m, once the sun had set. The Kelley transmitter is moved to various locations each year, a new AWA tradition. 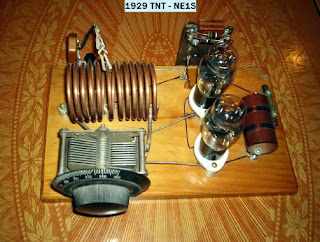 A new station for my '29 logbook was George (N3GJ), in Pennsylvania. George was managing 8 watts input to his version of a 1929 TNT. 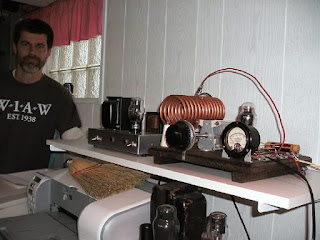 When I first tuned-in, several years ago, to hear what these 1929 signals sounded like, two of the best sounding signals were coming from KBØROB (Harold), shown at the top, and KBØMM (Burt), both in Minnesota. I could hardly believe they were using era-appropriate rigs as their signals sounded as good as many modern rigs. Thankfully nothing has changed, as these two stations continue to hand out 'MN' using their well-built 'MOPA'-style time machines. 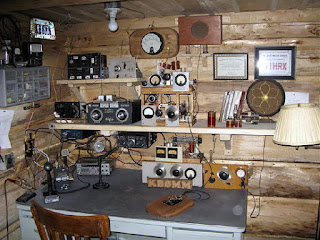 Scott, WA9WFA, the BK score-keeper in charge of logs, faded up briefly with his fine-looking Colpitts. 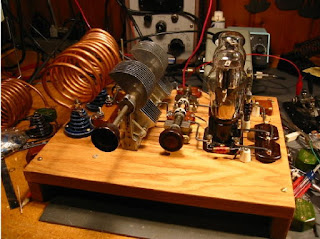 Here is a list of the '29ers worked so far, along with their rig style and DC power inputs.

As you can see, 'Hartley' construction takes a slight edge. Vintage 'handbooks' and magazine articles from the era, have always promoted the TNT as the best 'beginners' rig but in reality, the Hartley is much easier to build and to get working with a good-sounding signal. The TNT requires some finicky tweaking of the grid coil in order to have an equally stable-sounding note.

I'm happy to report that in spite of the very high winds (as usual), my new MOPA's tone remained virtually unmoving ... for the most part! This was its first real workout and after my first QSO on 80m, my frequency began making large jumps and suddenly sounding very unstable, along with fluctuations in power output. My initial thought was that one of the old original mica caps was starting to breakdown.

After disconnecting one lead of each capacitor (one at a time) and temporarily clipping in a modern substitute, I was no further ahead. I had originally isolated the frequency instability to the amplifier stage and there was only one thing left ... the amplifier's grid-leak resistor. It appeared to be slowly failing, by increasing resistance in jumps. The 12K resistor was now measuring ten times that value and quickly rising. A new 12K, temporarily clipped in place, cured the problem but it had cost me over an hour of operating time ... probably the best prop of the night as by the time I got back on the band, signals were weak and auroral-sounding.

Hopefully the bands will have mended themselves by next Saturday night, allowing some of the smaller eastern stations to make it back to the west coast for some memorable '29 'transcons'.
Steve McDonald, VE7SL, is a regular contributor to AmateurRadio.com and writes from British Columbia, Canada. Contact him at [email protected].