Unexpectedly I was at home today so I ran the 1W 28MHz WSPR again. As ever, conditions were a bit different. VK3XL was a very prominent path this morning, but my 1W didn’t get there! Nevertheless, some interesting conditions. 5Z4/VK1UN was a consistently good signal for most of the morning and heard me, which was very pleasing.

The US opening was pretty good to and I was pleased to be heard at K7UEB. Shortly after the band closed to North America, once again, there were some very strong signals from southern Germany, with DK6UG once again being excellent copy.

Looking at the difference between Julian G4ILO’s results and my own, I am tempted to take down the Butternut and use a loft dipole! Of course, the difference could be down to all sorts of things, I have a long feeder run of not very nice coax, which could be making a difference. Julian’s receiver is probably better than mine! I’m starting to wonder whether the lime tree, immediately behind the antenna in the direction of the west coast of the US isn’t shielding some of the weak signals. Who knows! It’s fascinating to contrast the results and in any event, I am amazed that 1W is getting as far as it is. But well done, Julian! 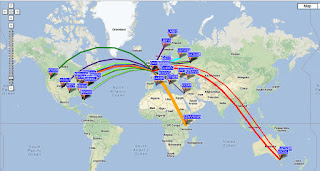