On Saturday, we returned to the Most Radio Active Mountain in Colorado, Mount Herman (W0C/FR-063), for a combination VHF contest, SOTA activation and winter hike. Our radio crew consisted of Steve/WGØAT, Caleb/W4XEN, Joyce/KØJJW and me. I’ve worked Steve forty times on various summits and often when he was activating Mount Herman, but this is the first time we did an activation together. What a treat be on the same summit as the Goathiker! Not only that, Peanut goat came along to supervise the entire operation.

My objective for the day was to chalk up another VHF SOTA activation, while also making some Qs in the VHF contest. For most SOTA activations, I just focus on 2 meters. During a VHF contest, I bring more gear to cover the other bands. The main rig for SSB/CW was my FT-817 driving an Arrow II dualband yagi for 2m and 70 cm. For 6m, I used an inverted Vee dipole supported by a crappie pole. I also had two FT-1D handheld radios listening on 146.52 and 446.0 MHz.

I made 21 contacts on 6m, 2m and 70cm, with 7 grids/mults and a Single Operator Portable score of 164. Not that great of a contest score but it was only a few hours of operating. From a SOTA perspective, this is an attractive number of VHF QSOs in a relatively short time. 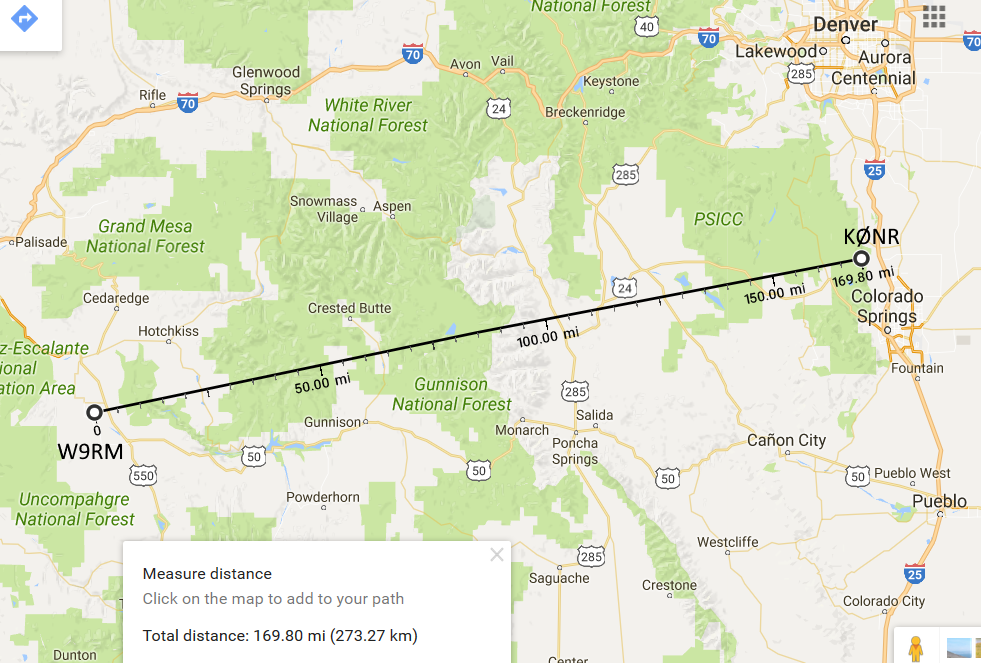 Surprisingly, even during a VHF contest, most of the contacts were on FM with the usual SSB contest stations rather scarce. It was very handy to be able to use 146.52 MHz for the contest, finding a number of casual contesters on that frequency.

The high point of the day was working Jay W9RM on the other side of the state in DM58 using 2m CW on 144.210 MHz. The distance was about 170 miles on a path that went over or through several mountain ranges. Not too bad for QRP. (Oh, I guess it doesn’t hurt that W9RM has a serious weak-signal VHF station: 2M-5WL yagi at 50 feet.)  This contact demonstrates the advantage of CW and SSB on 2 meters. Most VHF SOTA action is on FM due to the convenience of a 2m FM HT. But FM has poor weak-signal performance so much better range can be achieved with both CW and SSB. When is the last time you made a 170 mile QSO with an FM handheld?

This was the first SOTA activation for Caleb/W4XEN. Judging by the smile on his face, it won’t be his last one either. While I played on VHF, Steve did his usual thing on HF using CW, using a KX3 to drive an end-fed antenna. Caleb did a bit of both HF and VHF, managing to get a nice pile up going on 20m SSB. Joyce made a few contacts on 2m FM but mostly took pictures and occasionally tossed GORP in my direction.

On my last winter activation, my iPhone quit in the cold, so I did not want to rely on it for logging this time. I had a clipboard with my paper log on it, also holding the dual-paddle key. The key moved around a bit and my Morse code sending was sloppy.  I don’t work a lot of CW for SOTA but it does come in handy at times, so I’ll be looking at improving my setup.

The 6m inverted Vee worked out OK but it was a little inconvenient to run the coaxial cable to the apex of the antenna. I’ll be looking to swap that antenna out for an end-fed half wave, which is so common on the HF bands for SOTA.

Steve brought along a large umbrella for use as an instant-up wind shelter. That looks like a practical way to block the wind.

The weather was not great…we had a few patches of blue sky but it was mostly overcast and cold (probably 25 degrees F). We lasted about 2 hours before the cold started to take its toll, then we scooted on down the mountain.

Thanks to Joyce, Steve and Caleb for a great day playing radio in the mountains.