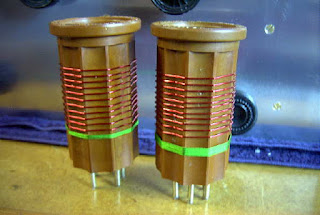 Monday was spent finishing the coil winding for my present bench project, a 3-tube regenerative receiver. The receiver first appeared in the January '33 QST article, "Rationalizing The Autodyne", by George Grammer. I tried to stay true to the original design, both physically and electrically, as much as possible. Where period components were not available, they were manufactured. Several capacitor are 're-stuffed' cases and some resistors have been physically altered to resemble era-appropriate styles. The one deviation I made from the original circuit was to remove the B+ (200VDC) from the headphones by going to impedance-coupled audio, which blocks DC from the headphone circuit. After finishing the coils and doing a quick re-check of the wiring, I held my breath and applied the power. 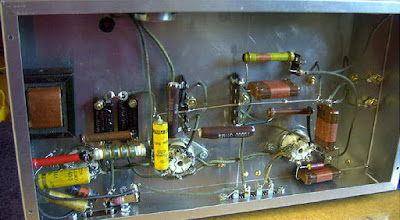 Much to my surprise and delight, the receiver worked immediately. It took me some time to find the correct control settings and combinations that seemed best but eventually its operation became familiar. Here are a couple of short recordings, crudely made via connecting the computer across the high-impedance headphones, as I tuned across a somewhat noisy 40m band in the evening.

Now although the receiver appears to be working, I'm not 100% convinced that it is working as well as it should. It's difficult to know exactly how it should perform when at its best as it really can't be compared to any of our modern-day receiving systems. Just what did 'good performance' sound like in 1933?

I have some reservations about one of my tubes. It's a '78' from my junk-box stash and has a large red '?' inked across the glass envelope. I may order some NOS '78's or even some more modern '6D6's, to see how they perform. On the plus side, the oscillator seems very stable and there is absolutely no 'hand-effect' on tuning, a common problem with many regens. Peaking up the RF stage tuning causes no pulling of the oscillator but the '78', although a hot-performer in 1933, provides plenty of tube noise as well, if the gain is set too high. I think the main advantage of having the tuned RF stage is to add RF selectivity and eliminate any bleed-through from some of the blowtorch shortwave signals just up the band. Tuning seems best when its gain is set between fifty and seventy-five percent of maximum. The large drum dial, in combination with the small bandspread capacitor, spreads 40m across most of the dial and makes for easy tuning although there is a small amount of backlash.

Another thing I noticed is that it seems to be very receptive to spurious computer birdies, with the laptop sitting just a foot away. Perhaps its unshielded top and bottom are the cause of this as I don't hear any of the signals on my main station receiver.

Comparing it to the two-tube regen in my Paraset, the Paraset sounds much quieter and generally sounds more sensitive ... but it uses more modern tubes, '6SK7's, first introduced in 1938, five years after the '78'. The selectivity seems as good, if not better, than the Paraset, which I consider an excellent performer. The Paraset also sounds just as good as my National SW-3, which was produced in the early 30's ... so the new regen is likely not as quiet nor as sensitive as the SW-3, probably the best simple regen of its day.

Perhaps some newer tubes will make a difference in performance and maybe my expectations are too high. In any event,  the closing paragraph of Grammer's article may be more telling that I originally thought:

"The set as it stands is not perfect, of course; nothing ever is."