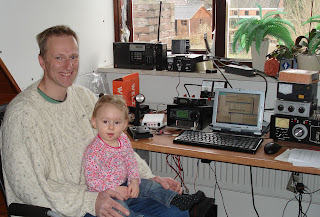 What can I tell, can propagation get any better? I only made 15 QSOs in the morning as my second operator did not know which buttons to push, so I had to follow her with my eyes constantly before she would switch off the entire station. That almost happened! Anyway, when she was away and in bed for her afternoon nappy I made te rest of the QSOs and stopped at 200. 15:15 UTC like yesterday. At that time the greyline was jumping in and the frequency went crazy. Worked 1 station/minute last 20 minutes. Signals booming from Europe, South, Central and North America with signals over S-9. Real fun to contest like this even without a beam. So different from my first ARRL 10m contest in 2006 when I actually obtained first place in the same category as now because I was the only participant! A overview: 2006-22 QSOs, 2007-30 QSOs (as PA25HSG), 2008-20 QSOs, 2009-21 QSO’s, 2010-5 QSOs, 2011-200 QSOs. What a difference!! Lot’s of nice DXCC worked a few new ones on 10m. A all band new one today was Guam which was surprisingly easy to work, and as he worked a lot of Dutch stations there seems to be a small path of propagation in between. Don’t know how many USA/Canada stations I worked as I lost count, I probabely worked some new states. A list of interesting DXCC: