Author: Sterling NØSSC
I had the honor of joining the Sandia National Labs Amateur Radio Club’s (W5MPZ) Field Day activities. The team consisted of 20 or so people who sought out this ham radio haven of a campground in the north edge of the Zuni Mountains near Gallup, NM. There was a lot of open space, many places to set up tents, and best of all, tall pine trees to hoist antennas.

Our station was active for almost 24 hours, minus a lull at about 1:10 am Sunday morning. Our backup arrived at around 2 am, which included Brian (N5ZGT, Rocky Mtn Division Director), who just got back from a Turks and Caicos island vacation (or DXPedition, you might say), and Scott (N5SQR) who worked PSK and SSB.

Before I arrived, the triband TA-33 beam was set up on poles over a center stake pounded in the ground.  It was rotatable by simply spinning the mast. The guy ropes were left slightly loose so that it’s rotatable, and they spool and tighten around the mast when you rotate it. They tighten just enough to cover the northerly half of the horizon without much added tension.
The beam was top. It was fun but frustrating to hear a section you haven’t worked on the back side of the beam, run out, turn it, and discover the station disappeared completely.

The 40-50′ tall Ponderosa Pines were more than adequate antenna masts. Our method of pulling lines over the trees was with a spud gun — a PVC contraption with an air tank, electric valve, and 3′ long barrel which shoots a PVC slug with fishing line attached to it.

On my first shot, I got over this tree and the line sat perfectly on the brown number post.

After shooting the line over the tree, we’d tie and pull thin twine to it, then pull heavier rope to attach to the antenna. Repeat for the other side, and hoist away.
We had an 80/40 m resonant trap dipole on one tree, and the other was an 80m Carolina Windom. They were both oriented for maximun E-W reception and did a great job.

A nifty setup was a motion sensitive camera connected to a Raspberry Pi. It snaps photos when it sees movement, and stores them on an SD card and posts them to our LAN. The router was for the LAN for syncing our logs. 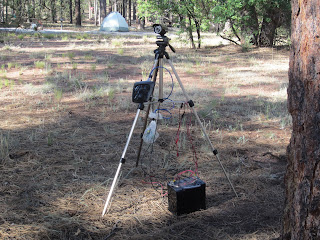 We were 2A, so we had 2 stations on the air, all supported by batteries. We operated SSB, CW and PSK31.

After setting up the last dipole, we began calling CQ on a clear frequency a few minutes before Field Day start to secure our spot in chaos. Once it began, signals filled the band but we had an interestingly slow time throughout the day. We shifted operators on the top of the hour, usually having a logger and radio op on each station. We made around 150 QSOs on SSB, CW and PSK31 before sunset.

No field day station is without its problems. We were lucky to only have minor issues, like the logs not syncing or the digital station computer interface not working. These were easily and promptly fixed. Everything else (except for the band conditions) was perfect.

Our ops came from all areas of the hobby. Brian, for example, just got back from Turks & Caicos, and worked hordes of stations from VP5-land, while Seth never worked a contest before being a technician.

Seth quickly caught the Field Day bug and worked the 12-1am shift by storm, and eventually took both working and logging on the voice station on solo.

It was very cool to see him warm up to the air and get excited to work stations. It reminds me of my first Field Day, where I was thrown into the action and started racking up QSOs as fast as any other operator after only having a few hours to figure it out.

Seth also worked PSK31 after showing him the macros. He first though it was going to be too difficult, like CW, but was amazed at how simple it is.
The county sheriff got the call from us to visit the site. He visited on his regular patrol and we explained our operations to him. He was certainly impressed.

My job at W5MPZ was to bring a satellite QSO to the log for an extra 100 points. Unfortunately, this didn’t happen.

I had several attempts at SO-51 (the only FM satellite), VO-52, FO-29 and the zombie AO-7 (all SSB/CW transponders). I had most luck with the SSB satellites but had problems in being able to hear myself.

My technique was to spin a carrier through the passband until I heard it on the downlink, and switch to SSB to call CQ and tune into myself. Upon the switch, I lost myself.

I figured out the solution on the last pass of the weekend. The FT-897 has a feature in SSB mode that allows you to send CW at your tone frequency. So if I’m on 145.000 and have a 700 HZ CW pitch, it would send it at 145.000.70 MHz. Therefore, if you were tuned into 145 MHz on another rig, you’d hear that same pitch. All I had to do was zerobeat on the flipped bandpass, and call away. I finally heard myself repeated by the satellite, but didn’t have any replies within the last 5 minutes of the pass.

It was worth the effort (and in hindsight I should have just worked the ISS’s message system via packet)!

The underlying point of Field Day (aside from preparedness) is to have fun. W5MPZ did exactly that. Our support team of family members kept us well fed, watered, sheltered, and our batteries charged. One could not ask for a better place to set up and operate from, and the weather (despite being cold in the mornings) was amazing – not having wind and the 100°F temperatures to contend with was a huge relief.

I’m not sure of the final QSO count or score, but we only missed a few sections in Canada – NT, MAR, and ONN I believe — like we expected. Field Day isn’t a contest, so the score isn’t important to me or any of the operators aside from personal club goals and whatnot, so that wasn’t a worry. What matters is the coming together of like-minded people to getaway from the daily grind, have a ton of fun, share stories, and work stations.