A nice QRP surprise this morning

We’re getting ready to hit the road for vacation.  It’s been a whole year since KD2CHE and I tied the knot on a cliff overlooking Lake Tahoe.

We’re not going to be heading back there yet, but wandering through New York’s North Country a bit.  I’m expecting to get a little portable QRP operation in as we poke around up there.  In anticipation of the trip, I picked up a spare power supply from my brother a few weeks ago to use with the Xiegu X1M, and any other 12V items I have or may acquire when I’m not near my main setup.  I decided to assemble the “motel room” version of my QRP setup here to see how it works.  I have the Xiegu, my Emtech ZM2 tuner, mic, the spare PS, and a small amplified speaker sitting here on the couch.  A string of 2 alligator leads is running from the ZM2 to the feed-thru from my random wire up near the window.  Everything powered up, and tuned up, so I decided to answer a couple of calls on 15M.

I made USB contacts with UT7UJ in Kiev, and S51ZZ in Slovenia from my test station on the couch here in Long Island.  Not bad for 5 Watts.  This little rig is full of surprises.  I also just found out from Ed at Import Communications through a post to the Xiegu X1M Yahoo group that he is going to be offering upgrade kits for the earlier X1M to upgrade the front panel and display to the newer version, as well as a strong possibility of a firmware upgrade that will cure many of this rig’s little issues.  The firmware upgrade has already been released for the newer model.

QRP: More fun than a barrel of microphones

This is an article I wrote for LIMARC here on Long Island, and also posted at my blog Fofio!.  Some of it is targeted to beginners in the hobby, so I apologize for the elementary nature of some of it.  Many of the kit references can also be found at my list of radio-related kits RadioKitGuide.com

I have been slowly getting into QRP these days (low-power for you beginners).  Being an outdoorsy kind of guy, it mixes well with my outings.  What has really surprised me lately 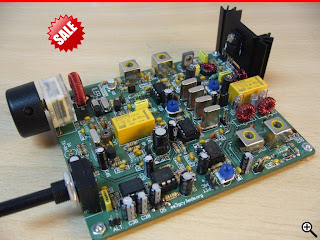 though, is how well you can do with some inexpensive equipment, and a simple antenna.

Most of my portable setup is relatively END_OF_DOCUMENT_TOKEN_TO_BE_REPLACED

I’ve been to this creepy state park several times since moving to Long Island.  Why creepy?  Mostly the abandoned buildings from the previous tenant on

this property; The Kings Park Psychiatric Center.  So, crumbling scary buildings, and a great view of the Nissequogue River Inlet?  Is there a better place for a Sunday afternoon QRP outing?  I think not!

While I was here last time, I spotted a great spot for a QRP setup.  At the top of the long hill, and past the courtyards is a nice grassy area that terminates at a fence at the top of a END_OF_DOCUMENT_TOKEN_TO_BE_REPLACED

A weekend with the Xiegu X1M

So,   I have now had the X1M since Friday.  I have to say that overall, I like it.  Friday night (as previously posted) I checked in to the

Brothers Net, and was heard clearly in Virginia, and again on Saturday night, when one of the members in Virginia relayed my check in to the operator in Maryland.  Also on Saturday I logged 5 of the 7 Florida QSO Party spelling bee stations from my living room, as well as a couple of other Florida stations.  Reports ranged from good for QRP, to Wow!  Only 5 Watts?  Keep in mind this is in a much-less-than-ideal setup.

In our apartment, KD2CHE and I are extremely limited on space, inside AND out.  The X1M is attached to an L-shaped random wire in the front yard, by way of a Balun Designs 9:1 Unun, and an Emtech ZM2 tuner.  Emtech recommends not using an additional balun or unun, but it seems to perform a little better with this crazy antenna.

It tunes up on most bands, and appears to tune  up on 75, but signal reports were bad on 75, with a lot of RF feedback, and I can hear myself in the  speakers I have attached to our TV when I transmit.  17 meters seems to be an issue with the TV speakers as well.  I’d love to put up something better in the front yard, but we’ll see what the landlord and neighbors are willing to put up with.  160, by the way is a no-go, but I don’t think that’s a surprise.

I’ve gotten the hang of using the X1M pretty quickly.  I haven’t used the memories yet, but I use the dual VFOs quite a bit, as well all of the different tuning speeds.  Everything is fairly straight forward once you get the hang of it.  Audio is what you would expect for a radio of this size (this thing is SMALL!), and fine through headphones.  The receiver is very sensitive.  I’ll get some actual numbers next weekend.  I like that you can kill the display light to conserve batteries, which will help when portable.

I’ve tried battery power.  With 8 alkaline AAs the radio seems to perform OK, however, 8 LiIon batteries are not quite enough voltage for the rig, producing some howls and distortion with the volume above about 40%.  I guess I’m not too surprised at this, since 8 FULLY charged AA Eneloops only put out 9.6 volts.  I will supplement that with 4 more Eneloops in series for a max of 14.4 volts.  Later on, I can pick up something a little more sophisticated.  I also made a coax-to-powerpole cable for mobile use, so I can always just set up next to the car when needed.

A coax power plug for making your own power cord, and a 1/8″ stereo (3 cond) plug for wiring to a key/paddle are included.  The power connector is a very common size, 5.5mm OD x 2.1mm ID, or Radio Shack size M, which made powering the radio up easy, since I had a size M-to-tinned-leads cable already.  I wired a straight-key up to the 1/8″ plug, and had to set the keyer mode to manual, which was also not hard to figure out.  The instructions are in Chinese, but an English translated manual is available from Import Communications, or in the X1M Yahoo group.

I finally received my assembled Xiegu X1M today.  I unpacked it and started tuning around before going out to dinner with the XYL, but after I got home I picked

up the mic and tried it out.  Attached to an Emtech ZM2 tuner, and about 50-odd feet of random wire in the trees here, I checked in to the Brothers Net on 7192kHz.  Not bad for 5 watts, and a less-than-ideal antenna.  We’re off to a good start.  More to follow.