My current assignment at Fort Leavenworth has me traveling quite a bit. My intent has been to bring a rig with me and have some casual QSOs while on the road. My success has been mixed. I would mostly attribute this to either a lack of planning on my part or being in a stuck in a hotel room with zero antenna opportunities.

One of the most inspiring ham radio blogs I ever ran across was the 100 Pound Dxpedition. I enjoyed how Scott, NE1RD, covered his adventures of conducting portable operations… documenting what worked and what did not. His last post on that paticular blog was back in 2007, but I still use the site as a reference. Scott’s praise for the Buddipole led me in using the Buddipole during my recent tour in Korea. Another tip from Scott I am going to try out is using a hardside golf bag case to transport my Buddipole to Hawaii.

Now for a rig… I think the Elecraft KX3 would be ideal for a Hawaii trip. With 10 watts output and an internal battery, I can’t think of better rig to take to the beach. But the wait time for the KX3 is still quite a while. I have both an Elecraft KX1 and a Yaesu FT-817ND. The KX1 would be great due to its small size and ease of use. But it is limited to only CW and I would like to do some PSK in addition to CW.

I pulled out my FT-817 and conducted an inventory:

– West Mountain Radio RIGblaster Plug n Play connects directly to the DIN socket on the back of the rig.
– CAT cable that connects from the RIGblaster to the rig’s ACC socket which enables rig control.
– PowerPole 12v adapter.
– Palm Paddle.
– Elecraft T1 Auto-tuner.
– Nifty manual for the FT-817. 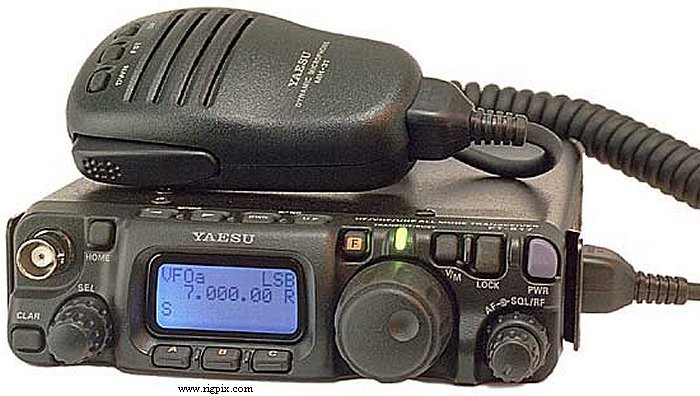 My FT-817 has quite a few of the optional bells and whistles from W4RT:

– DSP module
– Kranker Knob – probably the most useful of any of the options
– One Board Filter (300 Hz)
– Speech compressor built into the MH-31 handmike
– Why all the options? The FT-817 was the center piece of my 2009 Field Day setup and I was attempting to get the most I could out of the pint-sized rig.

For PSK, rig control, and logging I have my Dell Mini netbook. I had not used the netbook in a while, so I started it up to see how it was working. I initally purchased it back in 2009 baselined with Ubuntu and have kept Ubuntu installed on it since then. After booting it up. I updated the distribution to 10.04 LTS and installed fldigi. The RIGblaster easily interfaced with the netbook via a USB connection and the headphone/microphone jacks.

I configured fldigi to work with the RIGblaster to include rig control using Hamlib:

… clicked on the Initialize button and I was good to go.

Setting up the macros on flidigi is pretty straightforward with the default macros only needing slight tweaking for my personal preferemces.

Once I fired everything up all I had to do was switch to 14.070 MHz, switch the mode to DIG, and drop the input level a bit. With the narrow yellow PSK streams cascading down the waterfall, I picked one that was calling CQ and answered. Transmit worked and my home antenna provided a nice low SWR, no need for the tuner. My macros worked and the QSO was concluded successfully. All with 5 watts.

I plugged in the Palm Paddle, switched to 7.115 MHz, listened and heard nothing, then used the paddles to send QRL? a few times. SWR still looked decent. After a few CQ calls, I got an answer followed by a short QSO. Great – both PSK and CW were working FB.

Now the question is: do I want to bring my small Tokyo Hy-Power HL-100B amplifier that will raise the output to 100 watts? If I bring the amp, I will have to bring a power supply and a different tuner. I am thinking I need to be able to use two different configurations:

(A) Beach and Buddipole: using the barefoot FT-817, running everything on batteries.
(B) Lanai Portable: used from the hotel room, with amp and assoicated power supply.

Now it is time to go through my Buddipole bags and figure out what I need to pack.

Looks like I will be there during the Hawaii QSO Party!

I had a fairly successful day participating in the Armed Forces Day Crossband Test. To recap, I am currently at Fort McCoy, Wisconsin for a brief period of time supporting a National Guard exercise. Normally when I go around to different Army units and assist in their exercises I fly. But I decided to take my Toyota Tundra on this trip and re-installed my HF rig. I have never preiously particpated in the Armed Forces Day Crossband Test and have always wanted to…. this was my chance.

For the Secretary of Defense message I hooked my Rigblaster Plug & Play to my IC-706MKIIG and brought my laptop into the truck (which has fldigi installed). The Rigblaster worked like a charm and I was able to copy the SECDEF’s message from WAR (at The Pentagon), AAZ (Fort Huachuca, AZ), and AIR-2 (New York). All these transmissions were in RTTY, which fldigi was able to read without issue. Now I need to print out copies of the messages I copied (which are the same, except the header information which reflects what station was transmitting the message) and send them in to the corresponding station. In return, I believe, I’ll receive a certificate from the SECDEF (suitable for framing, I’m sure).

The crossband contacts caused me to take a crash course in split frequency operations for my IC-706MKIIG. Fortunately I had my Nifty “Cliff Notes” version of the manual and was able to figure it out pretty quick. Although the actual execution took a bit of time to get down. First, obviously, I had to hear the station calling. MARS HQ publishes ahead of time a list of each station and the frequency that they will transmit from. I built a spreadsheet that allowed me to sort by frequency which made it easier to search for the transmitting station. The searching was done in the IC-706MKIIG’s VFO A. Once I found the station, I had to listen for them to announce the amateur frequency they were listening to… which most stations did periodically. Once I got their listening frequency, I flipped over to VFO B, dialed up the frequency, tuned the Tarheel screwdriver antenna, flipped back to VFO A, then hit the Split function, and waited for a chance to call. In the end, I was successful in contacting five different stations: WAR (at The Pentagon), NWKJ (located on the USS Yorktown, Charleston, SC), NMN0CQQ (located on the USS Midway, San Diego, CA), AAZ (good ol’ Fort Huachuca, AZ), and NWVC (a Navy MARS station in Indiana). For these contacts I get to send in my QSL card and hope for a response.

None of this was exotic DX but it was fun and exciting… and a bit challenging trying to do it all from inside my Toyota Tundra. I hope I am able to particpate again next year.

FOR THE PAST SIXTY-THREE YEARS, OUR NATION HAS RECOGNIZED
THE DISTINGUISHED GLOBAL SERVICE OF OUR UNITED STATES
MILITARY DURING THE ANNUAL ARMED FORCES DAY CELEBRATION.

ON BEHALF OF ALL UNIFORMED SERVICES, I EXTEND MY SINCEREST
APPRECIATIMN FOR YOUR HARD WORK, SELFLESS DEDICATION, AND
VITAL SERVICE TO OUR GREAT NATION. WELL DONE!