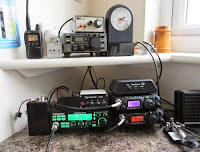 I have owned this rig for several months now but it hardly get used as I prefer, because of my poor voice, to run my WSPR beacon on 10m.  It certainly works well with my last QSO being a W8 on SSB.

In the picture, the small WSPR beacon is far left with the Lincoln  with green illumination on the left of the FT817s and to the right of the WSPR beacon.

10m SSB with the Lincoln Mk2

This afternoon, I have been trying out the President Lincoln Mk2 (V3) which arrived early today. I have only tried on SSB but it seems to work, with the first SSB QSO being with N8II in West Virginia at about 1430z. He was using 800W and a 5 element beam! It was hearing plenty from Asia, Europe and North/South America. Maximum claimed power from the Lincoln, controlled by a rotary control on the front panel, is 31W  PEP on SSB.

I have still to fully get to grips with the menu but it seems pretty intuitive.  There is a choice of display backlight colours, but I find green easiest on the eyes. The other choices are blue and orange. You can alter display brightness and lots of other features – I shall have plenty of time to play.  Blue is not good for my eyes on either the Lincoln Mk2  or the FT817. To my eyes, blue is hard to see, whereas the green is very clear.

My biggest issue was getting the power leads attached to the PSU.  Before my stroke this would have been trivial.  Now it tires me out! I wanted several rigs attached to the PSU at the same time so soldering the plugs on was non-trivial. As you know, speaking too long exhausts me,so I am taking a break.

I am waiting for my 12V battery to charge to test the 40m Pixie. Visually the Pixie build looks fine.

At the moment I am not on WSPR on any band.

As the price has dropped to £199 (a drop of £50) from Nevada I am now very tempted to buy one of these as 10m is my favourite band of all.  It is just coming up to the Es season too. Power output is ideal (for me) and it does all modes. I owned the original Lincoln President transceiver and it served me well for many years.  It worked all over the place on SSB and even on 10m AM.

This is basically a CB radio with bells and whistles, although as delivered it is 10m amateur band only. It covers CB bands with a simple, illegal in UK, mod.

For WSPR, 5W or less is quite enough on 10m, even with my “compromise” 3 band PAR antenna. In the quiet years ahead, a bit more power would be helpful on SSB, AM, CW and FM.

I am now getting very tempted to buy a Lincoln President II (version 3) which can run up to 31W pep on SSB. Probably it would run far less most of the time. Nevada have reduced their price by £10 to £249.95, I hope that includes free delivery for cash.

This is a dedicated 10m radio, although it can also cover CB bands with a simple (but illegal) internal wire cut.  If I bought one, I would only use it on 10m only: I have no interest in CB.  I think the latest mods turn this into a good rig. On my original Lincoln President – sold years ago – some impressive DX was worked in quieter years even from the car on SSB.

Yes, it is a glorified CB rig, but with some very useful features for amateur use and about half the price of the lowest cost amateur radio transceivers. There are other contenders too but these seem to have fewer useful features.

As my main interest (outside the 6m Es season) is 10m, this may be a wise buy.

SSB and AM on CB legal from June 27th in UK

The excellent Southgate News page reports that SSB and AM is now legal on UK CB from June 27th 2014.

I have only briefly operated on CB many years ago and was very disappointed.  I suppose 12W pep of SSB will greatly increase the DX potential on CB. AM is also legal.

We need to watch out for more reports of TVI and hi-fi breakthrough as FM, especially at 4W legal limit, is rarely a problem whereas SSB and AM make such issues more probable. Of course,  some CBers like to use (illegal) add-on amplifiers making matters worse.

I don’t think this move will encourage me onto CB any time soon, but it may result in lower cost 10m rigs.

UPDATE 2015z:  Nevada are now selling the President Lincoln 2  (3rd improved version of this model) covering 10m only (as sold – but expandable illegally to cover CB bands) with a £10 discount.

Potential buyers beware if you want to use the rig on 10m CW.  Hopefully, later versions/shipments will correct “early adopter” bugs. I can wait!

Doug says the Nevada ones are the most recent.  Some other suppliers are selling older versions (more bugs), hence lower unit prices.

Hi Roger,
You may be interested in my findings on the above radio. See http://gm0elp.blogspot.co.uk/
Cheers
Doug GM0ELP (fellow 10m enthusiast)