I have mentioned before that when I’m not in the shack I like to run a little program called aprsg to gate all the local APRS activity to a UHF frequency so I can see what is going on in the local APRS world using an APRS-capable HT. I have set up a system using sound card software, a USB sound device and my FT-817ND to do this. But I would like to make a standalone box for this. The first step in this project is to find a simple, cheap TNC.

There are products that would fit the bill from Byonics and Argent Data. Unfortunately they are not available in the UK and the cost of importing these kits from the US makes them less than cheap. I looked at the Fox Delta Mini TNC. But that is not a KISS TNC, as was confirmed by an email to Dinesh, the proprietor of Fox Delta.

Whilst searching around for possible solutions I came across a design for a TNC using a PIC16F88 microcontroller by WB8WGA that was originally published several years ago as an article in the ARRL experimenter magazine QEX. It has been modified by DJ7OO and ZL3AME, who had developed a stripboard layout for it. I had all the bits apart from the microcontroller and the clock crystal, which were quickly sourced on eBay. So I thought it would be an interesting project to build and experiment with. 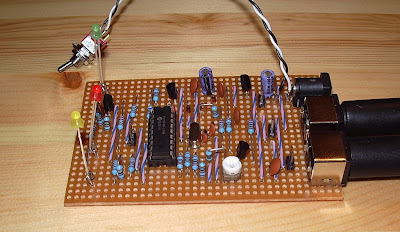 ZL3AME’s stripboard layout results in some quite lengthy signal paths. Despite this, the TNC worked first time, with just a minor glitch caused by my mis-wiring the PTT connection on the transceiver connector. (I have a standardized interface that I use on all my projects, with an 8-pin mini-DIN connector for audio and PTT to the transceiver, and a 6-pin mini-DIN connector for serial and GPS connections. I can then have a standard set of cables to hook the projects up to any radio, connect to the computer or a GPS, etc.)

With all the bits of APRS kit I have it was easy to generate some test signals and I soon had packets being decoded on the terminal screen. I wondered how sensitive the TNC would be as it uses the PIC16F88 to do the decoding instead of a modem chip like the MX614. I have not seen any DX packets decoded yet, but it does seem that decoding success is dependent on the audio level into the TNC. All of my APRS generators were decoded with the exception of my weather station, which has rather low deviation. When using the old Kenwood TH-205E as a receiver I could increase the volume so the weather station was decoded, at the expense of reliable decoding of the other radios. That was not even an option when using the DATA output of a radio, which has a fixed level. I suspect that performance could be improved if you could add an audio ALC on the input.

The TNC can also send APRS beacons and work as a fill-in digipeater. To send a fixed position you can simply encode the position co-ordinates into the beacon text. There are also a couple of jumpers that allow you to connect a GPS to the serial port, which would allow the TNC to work as a standalone tracker. I haven’t tried that, since I already have a standalone tracker. There are no Connect or Disconnect commands so it cannot be used as it stands for packet radio.

This is not a KISS TNC, so it can’t be used with APRSIS32 or aprsg or any of the software I use. I installed UI-View which apparently has the ability to use a TNC for APRS in Converse mode, but it doesn’t work with that either. I think that is due to the fact that the TNC expects CR/LF at the end of each command instead of just CR, so fixing that will be the task of my first attempt at modifying the firmware. Other things I would like to try are making it work at 300baud (for HF packet) instead of 1200baud, and implementing KISS mode. In KISS mode the PC software provides the complete packet and the TNC just has to add a CRC and send it. So in theory it should be simpler to implement than the existing code which has to construct an AX.25 packet from the information entered plus parameters previously set in the configuration. We shall see. The TNC source code is written in assembler, and trying to understand assembler code is to me like not being able to see the wood for the trees. But it will be a good incentive for me to look “under the hood” at how APRS, packet and AX.25 really work.

Many of the links to original information about this project seem now to be dead and I had to do quite a lot of searching to collect the information I have. For the benefit of anyone else who would like to try building one of these TNCs I have assembled all the files and information I found into a zip file which you can download here.

I thought packet radio was all but dead. Yesterday I heard Richard MM1BHO mention that there was a packet node in Scotland on 70cm at the same location as the GB3LA repeater which is a monstrous signal here. I asked Richard to tell me the frequency so I could have a listen. I wasn’t optimistic about hearing anything as 70cm has always seemed a bit of a dead loss for me. I had to wait a while to hear anything, and when I did, I found the packet signal was 20dB over S9 which is the strongest signal I’ve ever heard on 70!

I then spent a couple of hours trying to sort out a way of receiving the packet. TrueTTY seemed like a good choice. It decoded the packets and displayed them on its screen. But I couldn’t find any software that would work with its virtual TNC.

I also tried AGW Packet Engine in sound card mode. That, too, decoded packets, so I got the AGW Terminal software as well. But I could not transmit. The software keyed the PTT when it was supposed to, but there was no audio modulation.

Finally I bit the bullet, shut down the APRS gateway and put the Kenwood D710 into packet mode. I then set up AGWPE to talk with the Kenwood’s TNC. That worked, and I was able to connect to the node whose call is GB7WD. I was wondering what to do next when Clive GM4FZH connected to me and I had my first chat over packet radio since the mid-1980s!

I’m afraid after all that time I have forgotten just about anything I knew about packet radio so I’m still pretty clueless as to what to do. I don’t know how to set up a mailbox, or even where to set one up. There seems to be a shortage of material on the interweb aimed at packet newbies (or oldies like me where the onset of Alzheimer’s has erased any memory of what we once knew!)

I think packet radio is something I will enjoy playing with again. I went back to AGWPE soundcard mode and found that the reason I was not getting any audio was because although the software says it uses the left channel which online references claim is the tip of the stereo jack, it was actually present on the ring. After resoldering the connector on the audio cable I was able to transmit packets as well as receive them, and G4ILO is now listening on the GB7WD frequency on the A side of my TM-D710 while my 2m APRS gateway is using the B side. There are just so many things to do in this hobby!

NASA has asked amateur radio operators for help to determine if a recently launched satellite is operating. The NanoSail-D satellite was ejected automatically from the Fast Affordable Scientific and Technology Satellite, FASTSAT on Wednesday, January 19. NASA needs reports of the beacon telemetry to determine if it is operating correctly. The beacon signal is on 437.270MHz using standard AX.25 packet so APRS and packet radio operators with 70cm capability should be able to receive it.

Predictions for the satellite can be found here. Reception reports can be submitted here. Full text of the NASA press release here.

The winds of economic change are starting to have an effect on our online business. Because of that I am spending a lot more time on the computer trying to maintain our search engine positions and think of new revenue streams, with the consequence that I have less time or enthusiasm for blogging and other radio-related activities. 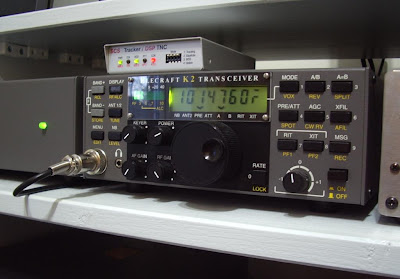 The only noteworthy item of radio news at G4ILO has been the acquisition of an SCS Tracker / DSP TNC for HF APRS packet. It is shown in the picture sitting atop my K2. When I find the time, I will write a review of this TNC for my main (non-blog) website. For the time being, all I will say is that I did a side by side comparison with the best of the PC sound card decoders and it was very quickly apparent that the SCS TNC decoded many stations the sound card software didn’t. Considering what it cost, I’d have been very disappointed if it hadn’t.