Show me a tidy shack and I’ll show you the shack of someone who doesn’t spend much time tinkering with equipment, or someone who has been nagged by his XYL to make the shack tidy and curses every time he needs to connect or disconnect something – which at G4ILO seems to be several times a week. 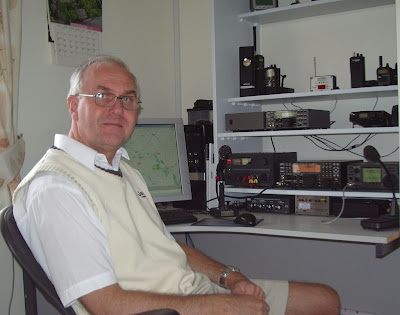 When I switched on the computer this morning there appeared to be a Sporadic-E opening building on 2m to the south east so I switched on the IC-910H and turned the SuperMoxon in that direction. Nothing was heard, so I switched to the vertical instead and was puzzled as to why the band noise was so much greater on the beam than the Slim Jim.

The opening passed, as all such openings have this year with nothing heard or worked, and I decided to investigate. I switched the computer off and the noise fell to the same level as on the vertical. Eventually, after much trial and error and cursing because the cables can only be reached by groping blind (with the aid of a shaving mirror or a picture of the back of the rig) behind the equipment I established that the problem was the serial cable providing PTT control to the interface connecting the 910H to the computer. Even when it was disconnected from the radio, plugging it in to the serial port on the computer caused the noise level to jump up.

This was a cheap interface I’d bought some time ago for the FT-817. The serial cable supplied wasn’t screened, but I’d shortened it to use with a USB to serial adapter without a lot of spare cable lying around. This had resulted in it being too short to use with a real serial port, so I had replaced the cable. I had used screened cable for the replacement, but although I had connected the copper shield to the GND pin of the RS-232 port, it wasn’t connected to the body or shell of the plug, which in any case was plastic.

I managed to solder to the metal flange of the plug, the bit that pushes on to the socket on the PC, and connect a short wire from that to the GND pin and the shield. That seemed to do the trick, and the noise level is now the same when the beam is pointing towards the shack as it is on the vertical. Problem solved, for once! Nevertheless I do sometimes wonder if computers are worth all the trouble they cause to us radio enthusiasts.

My gardener XYL Olga has been waiting for rain as eagerly as I have been hoping for a Sporadic-E opening on 2m and today she got what she hoped for. As I was shack-bound I decided to hook the IC-910H up to the computer.

A few days ago I noticed to my amazement that the accessory connector on the IC-910H is exactly the same as the one on the FT-817. I could have simply used the interface I used with the ‘817, except that I had shortened the serial cable to make it the same length as the audio cables when used with a USB to serial adapter. My new PC has two real serial ports one of which was earmarked for exactly this purpose so I had to make up a new, longer cable before I could get started.

On the audio side I needed to use a USB audio “dongle” as the on-board sound card is used by the K3. I already use a Daffodil USB sound adapter for the computer audio. The dongle I used for the IC-910H is an even cheaper, more basic one than the Daffodil and I had purchased it to make an interface for my Echolink node. It appears to be satisfactory for that. Hopefully it will also be good enough for 1200baud APRS packet using the AGWPE sound card software as well. I doubt that it would be good enough for any kind of weak signal work like WSPR, as I observed a few weeks ago that the Daffodil adapter could not reproduce my recordings of weak CW bounced off the Moon from Arecibo. But I don’t plan on doing EME or even WSPR or PSK31 on VHF anyway.

I set up APRSIS32 with the AGWPE software so I will be able to run an APRS gateway again when not needing the VHF radio for any other purpose. This may be useful as there seems to be an increase in APRS activity in the area. As well as Colin 2E0XSD getting set up on RF I have tracked G1TGY driving around the area. I’m not sure if I have the audio levels correct as I haven’t heard any APRS to see if I can decode it and APRSIS32 doesn’t support transmit through AGWPE yet.

I also installed the Echolink software on the shack computer and set up my Echolink node / hotspot. This is a personal node operated under the remote control provisions of my license so it is a bit wasteful that I have to generate 5W or RF – the minimum the IC-910H will go down to – and then dissipate it all in a dummy load to stop it being heard outside my property boundary. However it is nice to have the node available again as my back is playing up a bit today and it enables me to do some ham radio from a reclining chair downstairs or even lying on the bed if I need to.

Whilst setting up Echolink I noticed a conference called *QRP* which I hadn’t seen before. I see that several QRP bloggers have been trying Echolink recently so perhaps we could use this conference for an occasional get-together? I’ll connect to *QRP* more often over the next few days to see what if anything goes on there.