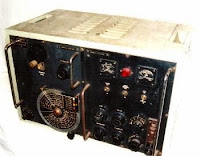 My very first communications receiver weighed a ton (it took 2 people to move it!) and was a DST100. I believe it was made by Murphy during WW2. This receiver, I have since learnt, was designed for intercept listening. It was built like a tank with a huge rotary turret tuning unit. The radio cost £7 from a local garage and it was overhauled (new valves?) by (the now late) G3CHN. It covered from around 50kHz to over 30MHz and heard some impressive DX. I was always puzzled why signals were so broad on the lowest range, not realising at the time that it covered 50 to about 150 kilohertz!  This was in 1962.

At that time there was little amateur band gear available (none from Japan) and lots of us used WW2 surplus gear which was available at low cost from many suppliers. Popular receivers were the AR88 and CR100. Transmitter-receivers included the WS19, WS38 and 52 sets.

Amateur radio in the 1950s and 1960s was quite different with lots of HF AM still and most people building their own transmitters. SSB was in its infancy. In many ways it was the high point of the hobby, although today we are blessed with low cost gear, free software,  more modes and more bands. The hobby means different things to different people. Long may it continue.