Author: Steve VE7SL
In addition to the new frequency allocations, amateurs heading into 1929 faced several other changes.
For North American hams, many of these had already been in place, but for much of the DX, this was all new.

Some of the more important changes are ones that we have come to recognize as "everyday practice" for the past several decades.

Like our friend below, and for all new amateurs worldwide, mastering CW would now be mandatory.

" Article {6} (3) ...any person operating the apparatus...must have proved his ability to transmit passages in the Morse Code and to read...passages thus transmitted."

" Article {2} (1) No radioelectric sending station shall be established or worked by a ...person...without a special licence issued by the Government..."

And hams would need to earn their tickets.

﻿﻿﻿﻿Article 6 (4) Administrations...take such measures to verify the qualifications, from the technical point of view, of all persons operating the apparatus."

No longer would hams have the luxury of making up their own call signs, although not an issue in North America since the end of WW1.  All calls would now be assigned by the government.

"Article {14} (13) ...private experimental stations must have a call sign taken from the international series assigned to each country."

﻿
No longer would hams be identified by the old style of call letters such as 'NU9AVZ' in the U.S., or as 'C5AU' in Canada. Country codes were changed internationally and U.S. hams became W's, K's and N's, as did commercial stations. Canadian hams became VE's, with both countries divided into numbered call-districts. This change was made several months before the end of 1928, well ahead of compliance.
The system of Q signals, as we know them today, were to be implemented for all users, both commercial and amateur. As noted in the September, 1928 QST, the signal for "QST" had been removed.

"The prefix for a general call to all stations has been changed from "QST" to "CQ" and the former is now blank in the international list of "Q" signals. That doesn't mean that QST is going to change its name though. If some uncomplimentary meaning has been assigned the letters "QST", such as "You interfere with me -- get out," we might have to." [QST September, 1928]

Although chiefly aimed at the commercial ops working mobile stations, such as maritime or aeronautical traffic, many of these new operating procedures filtered-down to amateurs very quickly and are still used today:

" Article {9} (7-1) When it is necessary to make test signals...such signals...must be composed by a series of  V's followed by the call letters of the station working. "

" Article {10} (1-1) Stations desiring to enter into communications...may use the signal of inquiry CQ...followed by the letter K... "

Although they had already been operating from Washington, DC, on a limited schedule, Jan 1st, 1929, marked the expansion of WWV, which began a regular schedule, cycling through 40 different precise frequencies during a two-hour period. All transmissions were in CW. This would allow for all users, worldwide, to calibrate their receiving equipment to 1929 standards.

Compiled in November 1928, the January 1929 edition of QST carried these last hopeful words before the big day arrived:

"January 1st, 1929, magic date, is upon us...the dividing line between the old and the new in amateur radio...when we look back...we are going to wonder how we ever got along in 1927 and 1928 with those crude methods which we once employed...It is the duty of every amateur to prepare himself for the new life which exists on the other side of January 1st." [QST January, 1929]

The following month's editorial described the early days of 1929 activity and was somewhat surprsing, considering all of the hard work that had gone into preparing radio amateurs for the new era.

"We write in the early days of January. January 1st, another tremendous hurdle, has been safely crossed, and somewhat to the surprise of some of us we seem to be still alive and kicking. The air seems very much the same as it was before; in fact, too much so...in the width of our bands...every amateur knows that these widths were changed. We cannot feel that there is excusable reason for an amateur operating outside the new frequency bands -- our preparation for success...has been thorough. All of us must realize...he who gets on the wrong side of the fence is very liable to be jerked up without warning for trespass...lets play the game. [QST February, 1929]


And so, finally, the long anticipated day came and went, but it seemed the ARRL's task was far from over. Not everyone had gotten the message or, at least, the entire message. VE4GU was all prepared for 1929 with new QSL's for his Jan 22, 1929 QSO with W9DYV on 40m CW but apparently missed the 'other' announcement...his card reports using '500V' of raw AC on his 210 Hartley! 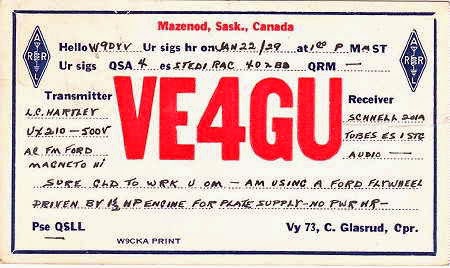 QSL cards from 1929 and later still, show many one-tube oscillators and simple receivers yet being used...it was a hard-sell to move hams from what they were comfortable with...but...things were looking up and there would be no turning back.


Without question our cherished hobby was shaped forever by those well-considered pronouncements and the timely leadership of the ARRL during those tumultuous days, so long ago. We owe them a lot.
And for those who have asked...that...is the reason why, once every year, we light-up our old 210's and celebrate the boys of '29.

Author: Steve VE7SL
As the leader of the ARRL's Technical Development Program and its assault on 1929 preparedness, Hull continued his relentless pace of construction and publication in the November 1928 issue of QST...turning now to receivers. The detailed article analyzed three receivers of varying complexity to see how they might fare in the busy "international bands" of 1929...and where improvements might be gleaned.

In "High-Frequency Receivers for the Coming Year / Incorporating Thoroughly Practical and Satisfying Selectivity, Open Scales, and a New Ease in Handling", editors proudly announced that,

Another equally important issue was addressed in QST's October 1928 edition, once again by Ross Hull.

"In view of the present off-band operation, it is not surprising that amateurs have been wondering how it will be possible for them to stay within the relatively narrow confines of the 1929 bands and to know definitely and at all times that the frequency of their transmitters is legal." [QST October, 1928]

"The Frequency Measurement Problem / Applications of the Monitor in Transmitter Setting and Signal Checking" described, in exacting detail, the construction and calibration of a combined monitor and frequency meter that would fulfill the new rules regarding frequency allocations...but only if hams used them regularly.

With the ARRL's reliance on QST's significant advertising revenue as a major source of income, the urgent 'need' to rebuild was not overlooked by the ad-men, as more building would mean that more parts had to be purchased. A skeptic might even suggest that the possibility of increased advertising revenue may have been just as much of a driving-force for the need of new construction than the new rules themselves!

Advertisers in QST were not shy about reminding amateurs of the coming deadline as well as promising easy solutions to compliance.

In early 1928, QST published several of the Convention articles that would apply to amateurs. Chief amongst them were the frequency allocations. North American amateurs lost about 40% of the spectrum space that they had previously enjoyed but...the harmonically-related bands, although slimmed-down, were retained along with exclusive access to the new and largely unwanted territory of 28-30mc.

Many amateurs at the time complained about the loss of older frequencies and that the League representatives had dropped the ball. In light of the times, and in view of the commercial feeding-frenzy for new broadcasting allotments, they fared very well.


With the steady growth of Solar Cycle 17 over the next decade, the exploration of 10m would lead to significant progress in the field of transmitters, receivers, antennas and propagation, driving experimenters to push the "state of technical development" in all four areas. It was, in hindsight, possibly the greatest gift of 1929.

But it wasn't just frequency assignments that were changing...1929 operators would need to change their crummy old operating habits as well! ....(cont'd)